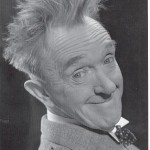 Stan looks how I feel, somewhat frazzled!  I am moving house tonight.  Yes tonight!  Everything I own is going to be in one place.  I can hardly believe it.  I will be installed in my 1930s Palace of Solitude behaving like I am in an episode of Poirot.  I’ll be the Miss Marple of Muswell!  Don’t expect to see me anywhere out on the town for a year now, I’ll be brassic.

I am so looking forward to living alone for the first time in about 15 years.  It is going to be glorious.  My plan is to FINISH the Silver Screen Suppers book this year.  Yes, I am making myself accountable by writing it here.  Hold me to it chums!

Anyhow, I still have lots of reports from test cooks to post so I selected one at random from the backlog.  Clint in Surrey had a go at Stan’s Yorkshire Pudding – the results were generally good but he wasn’t sure the puds should be continually basted as he felt it stopped them rising.   He said that his son Jake enjoyed his pud and he would make it again so I think it was a success!  Not sure it’s a classy enough recipe for the book though.  I don’t think we have another for Stan though so he might not make it in…

On the romance front I went on ANOTHER blind date last night.  With someone called Jefferson.  A cool name if there ever was one.  I was a bit distracted as I still had packing to do but we managed to down 3 pints each and had a fun time.  As with Olly the Lolly, if he wants to see me again I am game..

I just bought a new duvet and pillows and on my way back into work Jodie said, “Are you pimping your pad?”.  Well yes, I guess that I am!  Yipee!