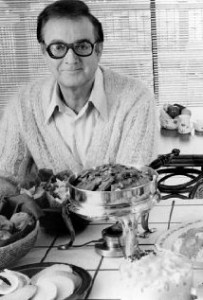 I loved Steve’s burger, and I really love this picture of him with a chafing dish.  A chafing dish is the “most-wanted-but-not-in-the-least-bit-needed” thing on my wishlist.  Joan Crawford loved hers… 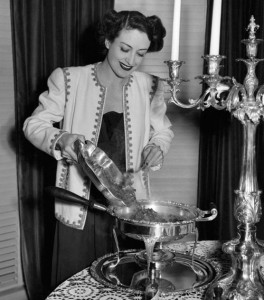 and I would love mine.  If I had one.   Where I would actually store it, I don’t know.  But I’ll cross that bridge if I ever come to it.

As Yinzerella so rightly points out, it’s HAMBURGER MONTH and I’m planning to write my next Eatdrinkfilms column about this phenomenon.  Hence, there are many burgers flying around the place at the moment.  Steve’s recipe will be in the article but it’s pretty simple really, just salt and pepper and Worcestershire sauce added to the patty (there, I’ve used the word patty two posts in a row…).   I’ll link to the column when it is out.  Here’s a nice pic of how mine turned out: 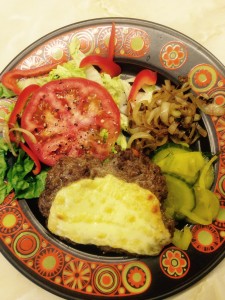 That was a super delicious FEAST for one.  Greedy.

To the right of the burger are the last of the best pickles I have ever eaten in my life.  Those of you who know me will know I am pretty pickle obsessed.  These were from PicklesMan at my local farmer’s market and I’m getting down there again as soon as I can to get some more.  His website seems to be down but here’s a link for future times – www.vadaszdeli.co.uk – on Twitter he is PicklesMan @vadaszdeli – highly, highly recommended.

My mince was from the divine newish butchers in Tufnell Park: 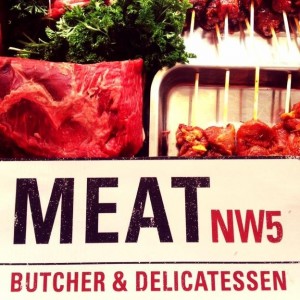 Mr R doesn’t like pickles and often calls me “Perkins” after a line in a song about a waitress called Perkins who ate so many gherkins, she pickled her internal workin’s.  That is probably happening right now…