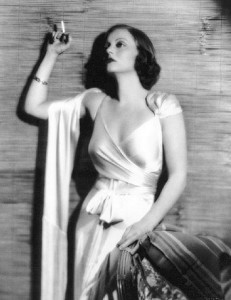 “Nobody can be exactly me.
Sometimes even I have trouble doing it.”
Got a fab freelance commission this week – selecting fashion films of the 1940s and writing about them. Film archiving doesn’t get much better than that! In discussion over a burger and fries my commisioners concluded that although folks have a strong idea about what 1940s fashion looks like – the 1930s is a bit of a forgotten era fashion-wise. But here is Tallulah rocking the very best look of the era – a white, slinky, silky, bias cut evening gown. YUM.

I’m getting excited about my impending visit to Austin. Not least because I am going to meet some of the lovely test cooks who are doing sterling work in the Lone Star State. One such is Gene, who gave a detailed response to the challenge of Tallulah’s Coconut Jumbles. Again, Tallulah’s dough was too sticky for rolling and Gene offered the alternative of making dropped cookies instead of cut out cookies. Makes sense! Although her hubby liked them, Gene thought they tasted like a “heap of cooked flour more than anything else”. Hmm. This one may need another attempt in the Crouch End kitchen. Food dye and dessicated coconut here I come!