My penpal and fellow film star recipes fan, Greg of Recipes4Rebels, sent me a meat loaf recipe recently that had raisins in it.  I was a bit alarmed.  Still, as I have discussed here at length previously, we Brits don’t know anything about meat loaf, apart from what we have learned from Joan Crawford and more recently. Jayne Mansfield. 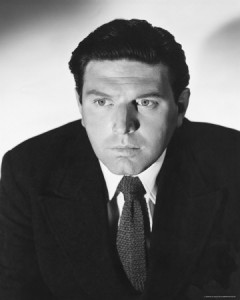 By co-incidence, shortly after Greg’s email arrived, Theodore Bikel floated to the top of my “recipes to test list” and his Glorified Meat Loaf recipe has raisins in it too.  So maybe it’s a “thing”.  This meatloaf was DELICIOUS – as they all seem to be.  Can’t decide which I preferred – Jayne’s or Joan’s or Theodore’s, but there is a massive slab of each in my freezer so maybe I’ll serve a slice of each up to Mr R sometime soon and he can do a taste test. 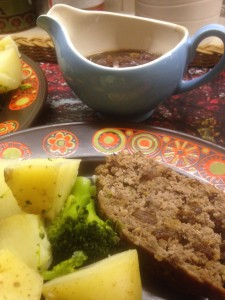 Mmmmmmmmmeatloaf!  Can you see the raisins?!

I couldn’t get dehydrated onions so I used these: 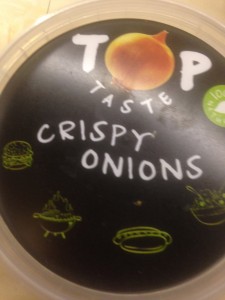 which worked well…  I’ve still got loads of them left and in a sort of “freaky eaters” style, I’ve been sprinkling them on top of my peanut butter on toast.  Is that weird?

dehydrated onions, amounting to one or two onions, depending upon one’s taste

Thanks Theodore.  I know you best for Columbo, but now perhaps I’ll listen to one of your albums! 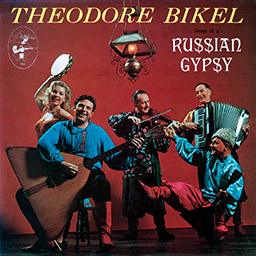