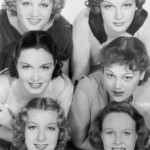 I’ve set myself a rigorous testing schedule for 2011 and can already see it’s going to be hard to stick to it.  I’m back in the wonderful world of internet dating and it is a right bun fight already!  Paid my subscription on Monday and have been on two assignations this week.

The first guy seemed mortally offended when I said (after two drinks) that I had to get home and make some soup.  He got in a right strop about it.  But last night’s prospect had a much better reaction.  When I said that I was planning a big soup he laughed and said, “What, to see  you through the week?”  Then in a very gentlemanly fashion he said he’d really enjoyed meeting me, would like to see me again and when might I be free?  You can guess which one gets the cigar…

I’ve put together a new list of recipes that need a friendly eye cast over them so it would be great to get some volunteers for these.  Just drop me an email – silverscreensuppers – at – yahoo dot co dot uk (trying to bamboozle the spammers there!)  These are the top candidates:

If you’ve emailed recently offering to test cook please forgive me for not getting back to you.  As soon as my tax return is done I will be on it!