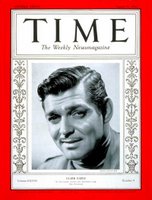 “Hell, if I’d jumped on all the dames I’m supposed to have jumped on,
I’d have had no time to go fishing. “

The only kind of hunting I do at the moment is MANHUNTING but Clark’s breakfast sure did set me up for the day yesterday. Tesco’s came up trumps with their “batter mix” which doesn’t have the same ring as “Bisquick” but did the job. I THOUGHT that I didn’t like pancakes but in my single girl haven looking out at a beautiful day on the river I enjoyed them very much. Lady Longhorn insisted that Gable’s specified “bacon” was “American bacon and NOT crazy British bacon”. I have no idea what American bacon is but had a picture in my mind of something ROUND so bought Wilthire cured ham and had that with a fried egg on top. Mmmm.

I guess when stinking thinking gets me pondering on how I ended up a being such a sad and lonely little rockabilly girl on a sunny Sunday morning, and I start feeling it is such a goddamn shame there is nobody else in my boat bed but me, I should just get my buns in the kitchen and cook myself up a delicious breakfast like that. Who cares if “man the hunter” isn’t there?