I have three friends who have birthdays really close to Christmas and they don’t tend to celebrate.  So I decided, as they are three of my very favourite people, to make them a birthday lunch.

I love my Vincent Price “Beverly Hills Cookbook” and I am working my way through all of the dinner parties that Vincent so eloquently conjures up in the audio recordings.  Today was the Dinner At The Casbah party and here (almost exactly as Vincent’s menu) is what we had 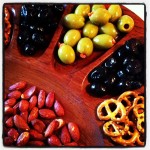 Pastilla – a pie which confused James by smelling like an apple pie (probably the cinammon) but having chicken in it. 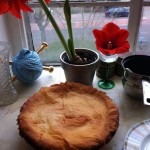 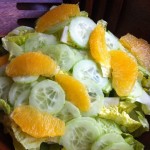 Tagine – this was really good.  Might make this again – it cooked for three hours and involved wine, onions, lemons and olives.  Heather – a staunch (and like Little Edie would say S-T-A-U-N-C-H) enemy of fruit with meat really liked it.  She says, “lemons don’t count.”  And I guess olives are a fruit too so for her, they don’t count either. 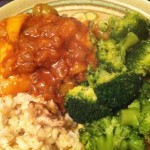 Vincent proposed Champagne Lemon Ice for pudding.  This was easy to make but because I was a bit tipsy when I made it (you only need two cups of the champagne so you can guess what I did with the rest) I did spill quite a bit of the sugar syrup.  That might have affected the sorbet’s ability to meld (if that’s the right word) as it was a sorbet of two parts – the granita part with the booze in and the meringue bit of the egg white.  It was nice though. 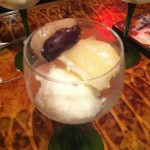 Cathy made these delicious Morrocan Stuffed Dates which we had with the sorbet. 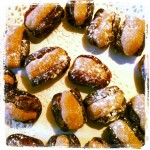 The feast was topped off with a screening of – what else – Casablanca.  Ringolina turned up to watch the film and when nobody was looking picked all the marzipan out of the dates that were left. 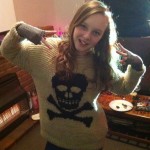 Then, when nobody was looking Heather ate the empty dates.  Dates are a fruit too right?  She’s gone fruit crazy!

2 cups champagne
¾ cups sugar
½ cup fresh lemon juice
¼ teaspoon almond extract
Grated rinds from lemons
1/16 teaspoon salt (a small pinch)
2 egg whites
Cook the champagne and sugar at a low boil for 10 minutes, then cool.  Add the remaining ingredients except for the egg whites.  Freeze in ice-cube trays for 1 ½ hours.  Stiffly beat the egg whites.  Beat the frozen sherbet until smooth.  Fold in the egg whites, cover with waxpaper and refreeze.  Soften the sherbet in the refrigerator for 20-30 minutes before serving.
Serves: 8

So now I have done three of Vincent’s dinner parties.  Dinner at the Casbah, Bounty of Paradise and Delights from the Sultans Pantry.  Still to do from the set I have: Exotic Delights from the Far East, The Wok and Classical Spanish Cuisine.  I fancy the Wok next. 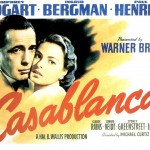