This was going to be easy! The plan was to get it all prepared and tucked away into the oven early on in proceedings. I would then be able to assist our lovely host with her main course, before getting on with the more serious business of carving our pumpkin, dressing up as Vincent Price (in TV chef guise, natch) and spinning Rock’n’Roll Halloween platters on the kitchen record player. 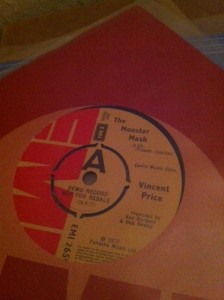 That’s not quite how it panned out, if you’ll pardon the pun. In fact it’s a testament to Jenny’s calm and expertise that it reached the table at all… 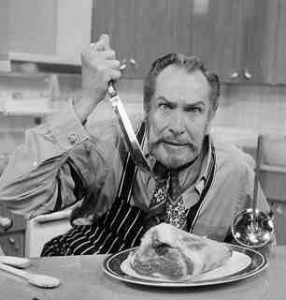 But first, a warning to the squeamish. The following account is not for the faint hearted. There will be blood. And gore! 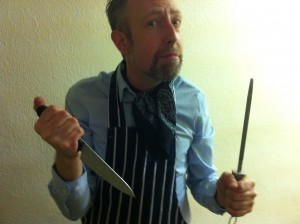 Let me say firstly that I am not the world’s biggest liver fan, and I’ve never made pate before. But, as you might gather from my choice of Halloween get up, I’m game for a challenge.
The recipe looked simple enough, and it indeed it should be, but I can sum it’s shortcomings up in two words. Streaky bacon! Now the bacon was mighty fine in itself, and it works perfectly for the outer wrapping when the mixture is ready for the oven, it’s the 6oz destined for the actual pate that proved the problem. 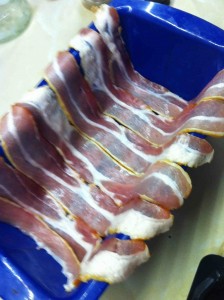 Mr Price makes no mention of cutting up said bacon (or anything else) before popping it in the mincer with the liver. I don’t know what kind of industrial meat grinder he was using in the ’60s but it was soon clear that it wouldn’t go through my hosts’. In fact neither would the raw liver (the cooked was less of a problem). Long strands of bacon fat soon wrapped themselves like monstrous tentacles around the blades and stopped them, well, grinding! 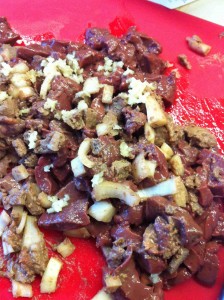 Undeterred, Jenny produced a food blender and I transferred the resulting messy pulp and and the now chopped remainder into this and gave it a blast. Seemed to be doing the trick, until she uttered those five ominous words…”where’s that smoke coming from?” It seemed those streaky tendons of doom had struck again, this time jamming up the blender and overheating the motor. Truly diabolical. 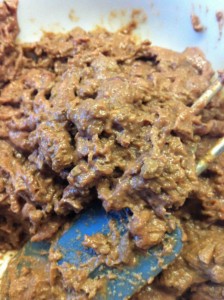 More untangling and chopping ensued and my trusting and patient hostess produced another smaller blender. In went the devilish, meaty mixture for one last attempt – but not before we’d ground the breadcrumbs and made sure we wouldn’t be needing it for anything else!
By now most of the bacon had been exorcised from the liver, plucked and unentwined from the blades and axles it had so mercilessly stalled, and bingo, I finally managed to get a pate smooth enough for our purposes.
But boy was it messy! Liver is bloody enough to start with, but the various decantings of our ghoulish mix just added to the general level of carnage and at one point, up to my wrists in the red gore I looked more like a surgeon from M*A*S*H* than a budding chef, and my poor host looked on in horror as her lovely sideboard turned into  a scene from the Crimean war….! 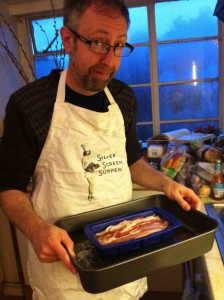 Sooo, with all due respect to Vincent, I would suggest a couple of amendments.  For the pate mix itself, try using back or middle bacon instead of streaky and do cut it up into small pieces first. Likewise with the liver (both the raw and the cooked) and the onion. I would also use at least two cloves of garlic, as I think Mr Price was afraid of offending conservative English palettes by suggesting just the one. As mentioned, the streaky bacon works perfectly in the baking utensil as a seal, and once we’d got it as far as the oven all ran smoothly. 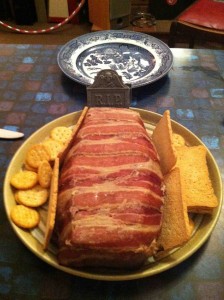 And what did it taste like? Pretty good apparently. It was a bit too ‘livery’ for Churchie and I, partly because neither of us really enjoy eating that particular organ, but also partly because most of the bacon had to be removed before it reached the oven. We wisely had just a few tastes (nice on a Ritz cracker, or a buttered Melba toast) and saved our appetites for our gorgeous host’s equally gorgeous main course of Creole style oxtail. 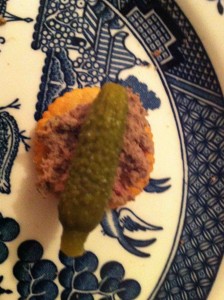 The texture and taste were a big hit with Heather and Jenny however who had a fair sized slice each. In fact Heather liked it so much she took the rest of it home with her, and you can’t say fairer than that. 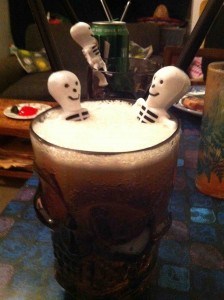 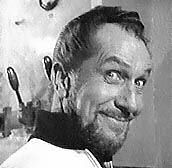