On Tuesdays and Thursdays, the Mersea Island fishermen sell some of their catch directly from the quayside between 2.45 and 4.30pm.  So we bundled down there to get ourselves some fresh fish. 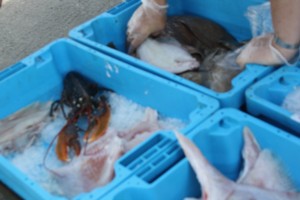 There were some lovely looking flat fish such as lemon sole, dabs, an unidentified thing with claws, skate wings, sea bass and lots of cod.  Here’s one of the fisherman at work filleting some cod… 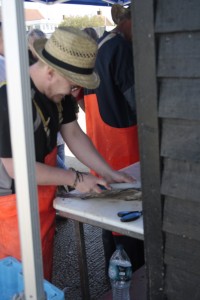 I had brought a couple of Mary and Vincent’s recipes from the Treasury with me (not the Treasury itself as it weighs a tonne!) and decided to do a version of their sea bass recipe. 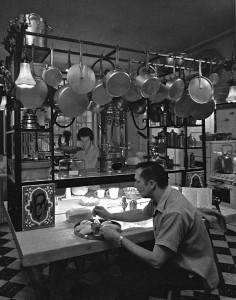 As we were only two of us, we bought two fat cod fillets rather than a whole sea bass.  I would love to do the whole of this recipe sometime though, with the potato all piped around the serving dish.  It would be like Vincent Price’s Fish Fillets Nord Zee all over again… 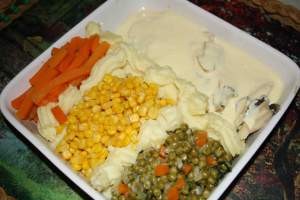 So there follows the recipe for a whole sea bass – this should serve 10 people.  I just baked two fillets of cod for about 14 minutes at 170 degrees C in a fan oven.  I’d sprinkled them with salt, pepper and lemon juice, popped some soft butter on top and placed half a slice of bacon on each fillet. 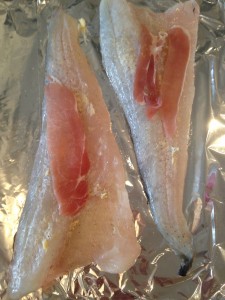 I made the mash more or less to Mary and Vincent’s recipe, but I didn’t put egg in, as I wasn’t going to pipe it or brown it in the oven.  So just cream and the seasonings.  It was GORGEOUS.  The next day I added an egg to the leftover mash and made little bubble & squeak type potato pancake thingamies for breakfast.  Yum. 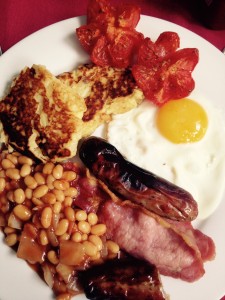 Place fish on its side in a buttered baking dish.  Brush with a little melted butter and lay one strip bacon over top of fish.

Bake for 1 to 1.5 hours, or until the fish flakes easily with a fork.  Time varies with size of fish.  Baste every 10 minutes so flesh does not dry out.

Place cooked fish on a large plank.  Spoon over any of its cooking juices.  Lay a row of lemon slices along top.  Sprinkle with chopped parsley.  Put buttered cooked vegetables around fish.  Make a border of duchess potatoes around edge of plank.  This is most attractive piped through a pastry tube.  Just before serving, pop under hot broiler to slightly brown the potatoes.

So here’s how my “adapted for two” version turned out…  It was utterly delicious! 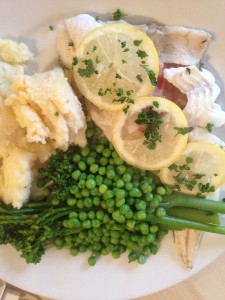