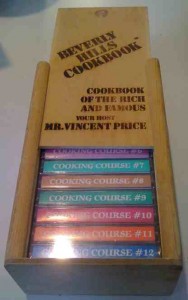 The Beverly Hills Cookbook tapes were recorded sometime in the 70s and are just bursting with Vincent’s humour, knowledge and joy of cooking.  They are difficult to get hold of but Mike Vines has kindly bunged them up on the interweb here and I do encourage you to have a listen.  In Delights of the Far East Vincent describes his own way of making curry powder and I ground some up last night ahead of a planned fish curry on Friday. 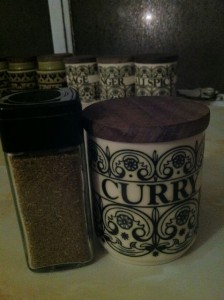 Vincent pulverises all of the above in a blender – I did mine in tiny batches in the spice grinder.  He not only uses it in curries but he also likes it sprinkled on cottage cheese, baked chicken, peanuts or popcorn with melted butter – just for fun he says.  Mmm cottage cheese, haven’t had any of that for ages.  Might try it.

I love Vincent’s suggestion that you play some sitar music and wear lots of bangles when you have friends round to a curry feast.  I must get hold of some for Friday.

On another matter, everything in my kitchen is lightly covered with a thin layer of melted marshmallow.  It was worth it though because I was very pleased with my Holly Cookies – recipe courtesy of Caker Cooking. 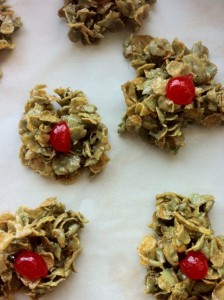 I took them to Cathy & Sloman’s party where there was a table veritably groaning with delicious stuff like a whole baked salmon, the most delicious roast ham, an Ottolenghi coleslaw that was divine and other Xmas style goodies.  I was quite surprised that so many of the Holly Cookies were eaten as everyone seemed to think they were made with pesto or some other savoury stuff.  Tracey said, “I thought they were made of Jerusalem artichokes, honestly!” and next day when I took some to work James said, “They are green, are they supposed to be green?” To which I replied, “yes, they are Holly Cookies – they look like holly and they taste like holly”.  They all went.  A festive marvel!  Merry Christmas Vincent! 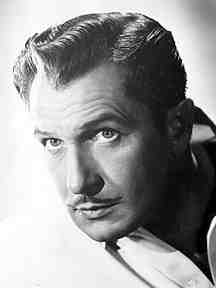