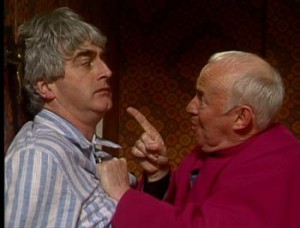 First the recipe, then lots of stuff about tidying food cupboards and a genius Burns Night…

Scald milk in a double boiler.  Beat the egg yolks, add a little of the milk and stir.  Then stir this into the scalded milk and cook until it coats a spoon.  Take off the heat, add the salt and sugar, and mix.

Line a trifle dish with lady fingers, or sponge cake, and wet well with sherry wine.  Pour the custard over these, then cover with more lady fingers that have been soaked in sherry.  Set aside to cool.

I’ve paraphrased the method a bit but that’s more or less as Virginia wrote it.  In the photo at the end of the post you’ll see my version.  I bunged some squirty cream on mine and sprinkled with hundreds and thousands.

Now the tidying up stuff…

Bishop Brennan (aka Heather) arrived on Saturday afternoon armed with grim determination to rid my cupboards of all out of date comestibles, and anything else she decided should be jettisoned.  Here’s a “before” photo to give you an idea of the kind of madness she was dealing with. 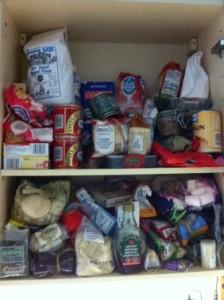 Although some of her decision making was to my mind a bit dubious (at one point she shrieked “Sesame seeds get on my tits!” and threw an opened packet of them away with relish), most of the time she had a point.  Acrid tasting hazlenuts were sampled then spat in the bin.  Busted up egg noodles that were dribbling little shards all over the place were dumped.  A tin of soup that had been in the back of the cupboard since 2009 was ceremoniously disposed of.  And behold the splendour she created with her expanding metal shelves, cut down shoe boxes and general inventiveness: 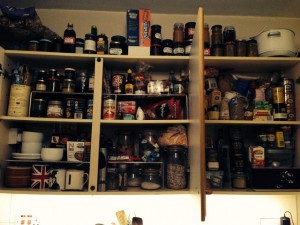 I shall endeavor to keep it this neat.  Really and truly I will.

In the evening we repaired to her place where Nathan prepared us a Burns Night Banquet of great ingenuity including haggis on a pizza.  I am not kidding.  He said this was probably a way of offending Scots and Italians in one fell swoop, but whatever, his pizza was DELICIOUS and I loved the Scots/Italian CD he had put together alternating bagpipe music with tracks from the soundtrack of The Godfather.  Here is the splendour of the haggis pizza. 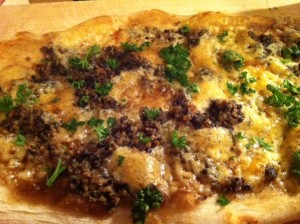 Nathan is king of pizzas and he actually cooked up ALL of the pizzas on his menu although we had to take the mushroom one home with us as we were absolutely stuffed. 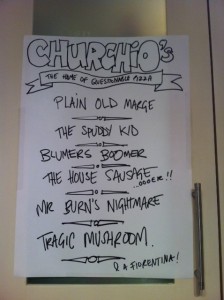 Mr R turns out to be half Scottish and much fun was had with his competition “Burns or Bollocks.”  He read out 8 bits of poetry and we had to guess which was Rabbie and which was Rubbish.  He’d thrown in a few from “The Poet McTeagle”, one by Ivor Cutler and one he’d written himself.  You should have seen his face when all three of us had guessed that his one was Burns rather than bollox.  He was as pleased as punch. 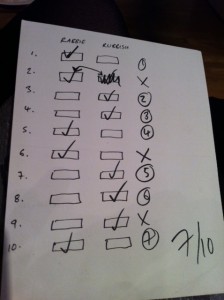 The last was the “Address to a Haggis” of course and we drank fine, fine whisky and Nathan did the ceremonial stabbing… 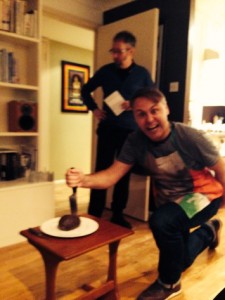 I offered to bring the traditional Tipsy Laird Pudding for afters and I found a recipe for Virginia Verrill’s Tipsy Parson Pudding which is a very similar entity.  My custard didn’t set but no matter, it was full of sherry and therefore delicious. 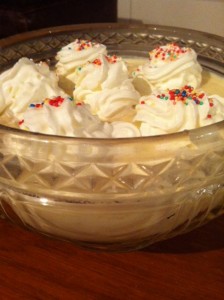 Here’s an account of a newspaper reporter being fed some of this in 1939 when interviewing one of the co-authors of the book in which it appears, the legendary “What Actors Eat When They Eat”.

“By the time we’d looked half thru the book, there was a new and aromatic smell coming from Harlan’s kitchen. “Tipsy Parson Pudding,” Harlan said. “Virginia Verrill gave us the recipe.” We had two dishes of that and all we can say is that Miss Verrill must not have to worry about a double chin. Tipsy Parson Pudding consists of rich custard, poured over lady fingers, which have been soaked in sherry wine. It is a noble dish.”

It was indeed a noble dish as is the “Mr Burns Nighmare” pizza a noble dish.  A noble day and a noble evening with noble, noble friends and countrymen. Noble. 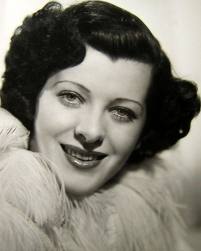