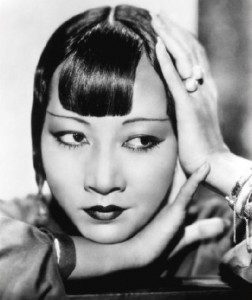 “I’m Anna May Wong. I come from old Hong Kong.
But now I’m a Hollywood star.”


It’s my first night in the new W1 abode. Night is falling over Centre Point, Big Ben and the London Eye and a batch of tea cakes are in the oven. The Marathon Man from my office requested some as a reward for his months of training. He did it in 4 hours 22 minutes so it’s the least I can do.It’s fun cooking in a new kitchen. Not for the first time I’ve had to use a colander instead of a sieve. Not the first time either that I’ve been puzzled by arty symbols for grill / fan assisted grill / oven / fan assisted oven etc. I just guessed.

Lucky the supermarket isn’t too far away either. I had to make an emergency trip after trying to break one of the eggs in the fridge door only to find it was hard boiled! No fancy frenchified ball point pen writing on the shell to say “boiled” like there was in Dan’s fridge…