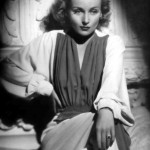 I really intended making Carole’s soup tonight but I admit it, I got too drunk.  Since moving into the Palace of Solitude, Fridays have become the most significant night in my (un)social calendar.  I wriggle out of all and any invitations and scurry home so that I can be sitting in an armchair with the radiogram tuned to Desmond Carrington on Radio 2 at 7pm sharp with Vodkatini in hand,  It is becoming my”family of one” tradition.

Tonight I realised that I should probably explain to one and all that I am not the ace cook it may seem that I am from this blog.  It’s true, I do probably cook more than the next person but that’s because I am trying to write this b****y  Silver Screen Suppers book!  In reality, left to my own devices I will “graze” as Rosalind puts it.

So this evening I ate the following whilst standing up: a small can of Green Giant sweetcorn, from the can with a fork, interspersed with 3 delicious slices of ham my mum gave me last weekend left over from the 60th Wedding Anniversary party.  And that’s it.  I really and truly couldn’t be bothered to cook anything.  Too busy drinking basically.

The funny thing about deciding that Friday is the “Spinster’s Night In” is that there is endless amusement to be had with me myself and I.  I’m not sure if I would feel ashamed of some of the events of this evening if there had been some kind of man in residence. I think that yes, I probably would have been apologising all over the place…

For example, I laughed heartily out loud when attempting to get peas out of their pods in front of the gas fire as one PINGED out in a kind of science fiction style, bounced off the metal hood of the fire and was never seen again.  Later on in the kitchen upon opening the lid of my vintage French cake carrier I SHRIEKED OUT LOUD to discover that there was the lemon frosting encrusted tupperware container I’d taken into work for Jim’s cake leaking all over my precious pot of edible glitter!  Upon trying to clean aforementioned glitter pot I managed to dump half of it on my draining board, washing machine and floor.

Oh and hearing Bette Davis singing, “They are either too young or too old” on “Friday Night is Music Night” was basically the icing on the cake.

It’s fun, but not as most people know it..