Corn. Mmmm.  Bacon. Mmmm.  Potatoes.  Mmmm.  This is real comfort food.  I love it.  Perfect for the book with no tweaking. 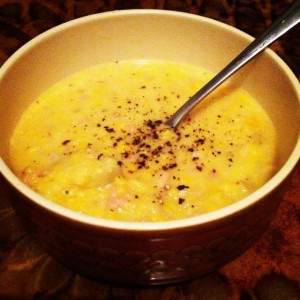 One of my foodie bucket list items has already been accomplished – well half accomplished.  My wonderful friend Cathy has her arm in plaster after falling down some rather unforgiving spiral stairs.  She’s the best cook I know and it’s hell for her to have the new Ottolenghi book right by her plaster encased elbow and not be able to get right in amongst it.  One of her daughter’s new year’s resolutions was to cook a three course meal so I offered to sous-chef.

First step was to chop and fry up a whole bunch of onions.  The onions were making Jessie cry so I suggested she go and find her swimming goggles. 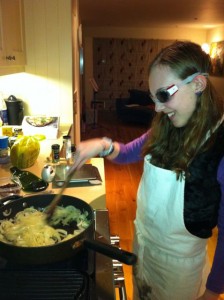 Here’s her starter – Bruschetta with mozzarella and tomato. 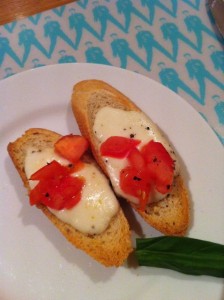 Main course, an Ottolenghi dish from the new Jerusalem cookbook, I think it is called something like Chicken with Cardamom Rice.  It was really delicious – natch!  And despite the general view that Ottolenghi recipes have too many ingredients, this was really quite simple once everything had been removed from the spice cupboard in order to seek out the cinnamon sticks.   We didn’t set fire to the tea towel either… 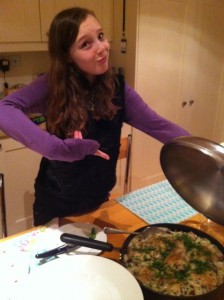 Jessie made this awesome salad, eventually being persuaded to remove the goggles for the slicing of the radishes.  This is another Ottolenghi inspired creation.  It’s a feast for the eyes.  Yum. 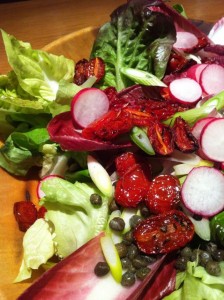 Our banquet was finished off with meringues – some chocolate, some plain – deliciously crunchy and gooey at the same time.  Bravo Ringolina!  It was an utterly delicious family feast.  I’m going to ask Jessie to teach me how to make meringue as that’s also on my bucket list… 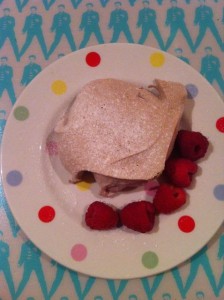 I think Dick would have really liked Jessie’s dinner.  He enjoyed cooking and I get the feeling he would be very appreciative of meals cooked for him.  Viva Dick and Viva Jessie Ringo. 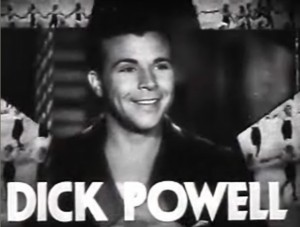