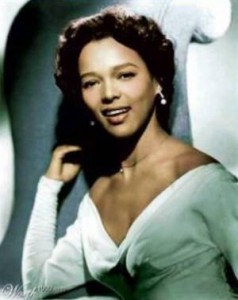 “…no producer ever knocked on my door.
There just aren`t that many parts for a black actress”
Much debate via emails flying between Cardiff and London about why Dorothy’s Omelet is “Emotional”. Plenty of chopping of onions it is true, but I wonder if it is more that Dorothy would whip one of these up when she was feeling particularly low. An emotional actress without a doubt, Dorothy’s autobiography is entitled: “Everything and Nothing: The Dorothy Dandridge Tragedy”. If anyone knows the origin of this strange recipe moniker please let us know.

Well, our first Wales based test cook knew that she couldn’t make an omelet without breaking eggs and she did so with vigour to make this dish. Reporting that the recipe was very much “of its time” Marilyn H. suggested adding a couple of items to make it slightly less meaty for the modern palate – some tomatoes and mushrooms. Mmm, it’s Sunday morning and that is making me very hungry for breakfast.

Marilyn has also volunteered for Groucho Marx’s Matzo Ball Soup so that will be coming soon. We’ve been swapping Groucho food related quotes and as he once said, “Time flies like an arrow, fruit flies like a banana” so I’m off to rustle up brunch. What a shame that Sidney is anti eggs, I quite fancy getting emotional…