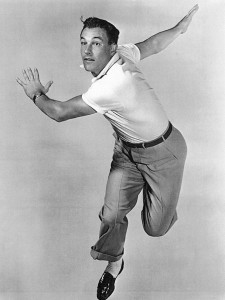 “I got started dancing because I knew it was one way to meet girls”
It’s a double whammy today with a tester Stateside (Jeanne) and a tester Thameside (Hedy) both trying out the “Greatest Man Sandwich in the World”. It’s quite a claim isn’t it? And particularly surprising in that it doesn’t contain the one thing that most men seem to deem necessary in a sandwich – a great big slab of meat.

And did these ladies make these sandwiches for their men? No they did not! They wolfed them down themselves both announcing the mashed potato stuffed french bread adorned with mayo and red onions to be a great combo. Hedy proclaimed it “The ultimate carbfest for real men!” and Jeanne said, “This is a total YUM! recipe and I give it 5 stars out of 5!” Who knew a potato sandwich would be such a winner?

I may have to include a “photos” page when I fancify the website a bit as Jeanne sent a hilarious photo of her sandwich “before and after a bite”. It is making me hungry just looking at it! Gene would have been proud of our testers, for in his recipe he acknowledges that the sandwich is not just for the boys, saying “be sure your wife has at least one bite”!