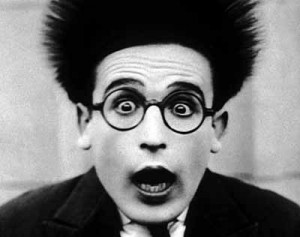 “The pain was considerable,
but trivial compared with my mental state.”
Hmm, yes, well my mental state has been somewhat rocked by your Eggs Mr Lloyd!

Revolting they were, almost inedible! It’s a long time since we had a failure in the Silver Screen Suppers kitchen but Harold’s eggs were it. He might as well have called them Eggs Dolorous (meaning sorrowful) as the pile of them all pink and scrambled was not a pretty sight to see. Sigh. Luckily I had some nice crispy bacon on the side to allieviate the pain of wasting 3 perfectly good eggs by adding cheese and TOMATOES. Bleaugh! Bring back Dorothy Dandridge’s Emotional Omelet.

I am hoping for better things from Lupe Velez’s Tamale Pie which I’ll be attempting later today. I have never had Tamale Pie, I do not even quite know what it is, but I’m going to find out…