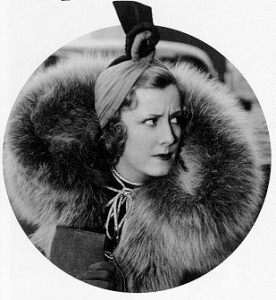 “Years ago the public used to hound me
but now I can go shopping in peace.”
Brand new test cook Kim sent over a report on her cooking of the shrimp dish. She also, much to my delight, sent a photo of the finished result which I shall load up to the Flickr site (you can be transported to this via the picture of a buffet spread in the sidebar to the right). I have never been to Kim’s kitchen but I love the fact that she has black marble work surfaces – tres chic! Also love the fact that there is a glass of fizz lurking in the background of the shot!

Kim and her guest (who was it I wonder?!) enjoyed the shrimpy dish very much. I have a feeling that she bought nice big fat king prawns rather than the teeny weeny shrimp Irene might have used. Obviously a gal who likes high-hat living, Kim even suggested throwing in a couple of langoustines to “add a bit of luxury”.

I am in a mood for confession so I will admit that I have never eaten a langoustine. In fact, I am not even sure I know what one is. Mini-ature lobster? And while we are at it I will also come clean and admit that although I know that Irene is probably my co-writer’s favourite silver screen star, I’ve never seen a film with her in it. Shocking – bring me ebay immediately!