The last time I made James Garner’s Oklahoma Chili I was thrilled that James’ daughter Gigi got in touch via Twitter about it.  However, Gigi wondered if the recipe might have been her grandfather’s recipe rather than the personal recipe of the James we know from movies and TV.  Gigi was dubious about the recipe as her father didn’t like onions and there were plenty in the recipe. 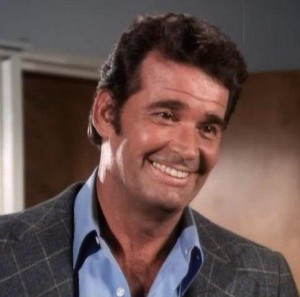 However, I have tracked down another recipe attributed to James Garner and this one is definitely the James we know and love as the blurb at the head of the recipe reads as follows:

“What a year it was for James Garner in 1994.  Big Jim starred in Maverick, CBS reopened The Rockford Files, and his chili recipe was a resounding success with our tasters.  He’s a chili lover from way back though – appearing on screen with Sally Field, he told her his ambition was to write a chili cookbook.* Sorry.”

So this is the recipe from The All-American Chili Cookbook published in 1995. 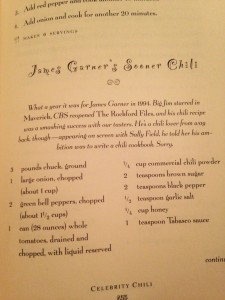 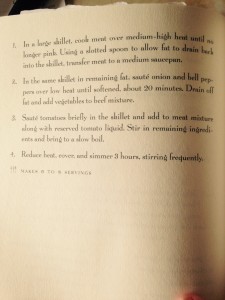 Vic came round last night and I made a half measure of James’ Sooner Chili and it was gooooooooood.  BUT, I still think that his Oklahoma Chili is the very best chili ever.  Do I think that the Oklahoma Chili recipe published in 1987 is THE James Garner’s recipe?  I do.

Forensics…..  The recipes are very similar, with one difference being that the later recipe doesn’t use fresh chilis, just chili powder.  The REAL difference and the key one in my opinion though, is that the later recipe doesn’t include the margarine.  This for me is the magic ingredient. Yes, I know that margarine isn’t very good for you, but that chili recipe is soooooooo delicious I just don’t care!  Perhaps in the mid-90s folks were getting more health conscious and 1/4 pound of margarine was deemed unnecessary…  If you were choosing between the two though, I would heartily recommend the 1987 version.

Vic and I watched 2 episodes of the Rockford Files and ate masses of James’ Chili.  I forgot to take a picture so here’s one of the big portion I had left to freeze…  I’d say that half the Sooner Recipe serves 3 with healthy appetites, 4 if you are having other things alongside. 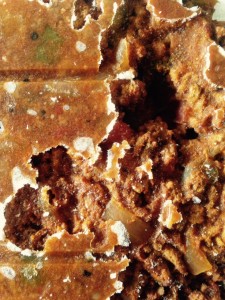 * this was in the film Murphy’s Romance when Sally asked James’ character what he wanted to do when he grew up.

PS – The use of the word Sooner in the title of this chili is a reference to the fact it is an Oklahoman recipe.  Sooner was a term for an early settler in Oklahoma and it’s also the name of one of the state’s football teams.