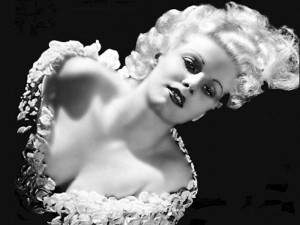 “I like to wake up each morning feeling a new man.”
Ha ha, me too Jean, me too!

For the first time in living memory however, I have woken up on the first day of a New Year totally on my lonesome. Not too hungover to make myself laugh by saying out loud immediately upon waking up, “Happy New Year To Me!” All sorts of resolutions have been made for the new decade, one of which is (broadly speaking) to just get my act together. It’s vague I know, but it has to happen.

My New Year’s Eve was lovely. Spent in the bosom of my pals in Crouch End drinking copious amounts of bubbly, eating a few Hollywood canapes including Jean’s classic shrimp dish and entertaining each other with “turns”. Shirley played us a song on the piano, Paulette gave us a tune on the accordion and Ivor led us all in a game of bingo. Marvelous. I did a family friendly version of my paper tearing act.

So the new year begins with preparation for a grand luncheon tomorrow with all recipes by Hattie McDaniel. There is much to do but I’m managing to squeeze in a cheeky drink with Charley at Villiers Terrace later. We are both agreed we are going to dance on the grave of 2009. And besides, my mum has sent some Christmas cake for him…