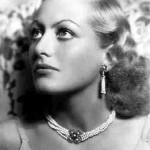 Slightly chaotic at Silver Screen Suppers Towers tonight as I attempt a singleton’s version of Joan’s recipe designed to serve eight people.  She sure did love to entertain.  I am left with the sneaking suspicion that because I had to divide 2 tablespoons of crushed all bran between 8, the resultant guess of two pinches from a whole box bought specifically for this recipe will mean a lot of all bran for breakfast from now on.  It’s tricky too cook such a thing after several Vodka Martinis listening to the glorious Desmond Carrington show on R2 (tonight’s theme was “cross dressing” so it may be his last…) but it’s in the oven and l have given it my best shot.

I’ve had a glorious day on this, the inaugural Spinster’s Annual Day Off.  I didn’t get out of bed until 11am, I took two bags of toot to the charity shop, treated myself to brunch, went to the cinema, downloaded a free trial of Scrivener and in a kind of ZEN like moment found two key jigsaw bits that fit in split seconds….  It was a marvelous day.   Possibly the best bit though was going to the cheese shop in Muswell Hill and meeting Morgan the woman who is taking it over in January.  I felt like a bit of an old biddy when I screeched, “You are too young to run a shop!”  but I was – to be honest – quite taken aback that someone so young knew exactly what cheese would make a good replacement for the illusive Asedoros – Mexican cheese – called for in Dolores Del Rio’s Enchilada’s recipe.  Methinks I will try and put into practice my new resolution of shopping at local shops rather than the big supermarkets and drop in on Morgan next Saturday.

OK, here’s a newsflash – the Pepper Cup was good.  Probably because there was 45 ps worth of single cream and a lot of Worcestershire Sauce in there and MAYBE because I am drunk but I proclaim this to be a worthy and delicious supper for a one year anniversary of singledom.  Cheers!