I’m writing this in the “Joan Zone” – Mr R’s name for the writing desk in my bedroom. I wanted to create a space that would help me to concentrate on all the many things I need to do before the book launch. I’ve moved away from “Columbo Corner” (the comfy sofa in the living room), and this new space will hopefully help me to focus. The Joan Zone is currently very tidy. Won’t stay like this for long I’m sure. 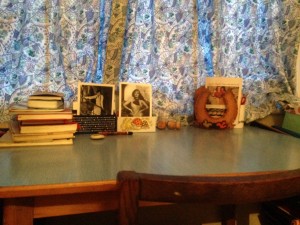 Fans of super cool comedy show Spaced might recognise this table.  I am convinced it is the table that Daisy attempted to write stuff at on her typewriter.  She mostly ended up boozing at it instead though, but I’m going to make the Joan Zone a booze free area.  You can just see the table in this photo below.  I bought it in Junk and Disorderly in Crouch End and I believe that Simon Pegg used to live there (or still does) and all of this makes me shout: MY TABLE every time I see it in the kitchen in Spaced. 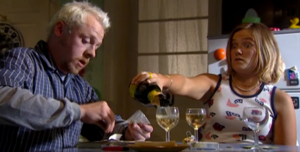 Last night I made Joan’s Pork Chops again. They were absolutely delicious. Easy to do on a Friday night after work and a really tasty treat. So cheap too! Especially as I had everything in the recipe in stock apart from the pork chops and Mr R bought those.  Pork is so cheap in England at the moment, I fear for our pig farmers… 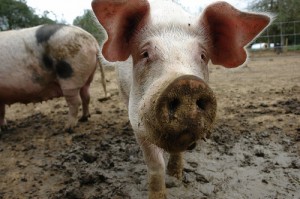 Red onions, fried in a huge amount of butter, chops, Lawry’s Seasoned Salt, flour, apples, lemon juice, nutmeg (actually I forgot the nutmeg), cinnamon and brown sugar.   Mmmm, a perfect combination that filled the kitchen with autumn aromas.  Gad, I could eat another portion of this right now. 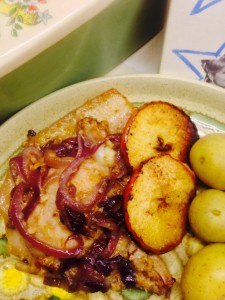 Here’s a tip to myself and for those who have a copy of the Joan Crawford Cookbook and check back here for the photo regarding apples. Previously I’ve used cooking apples in this recipe and last night I used a Pink Lady apple that had been in the fridge. It was PERFECT and the apple rings were much nicer than those I’ve done with Bramleys. The Pink Lady slices really held their shape and didn’t go mushy.  Maybe being fridge cold helped? 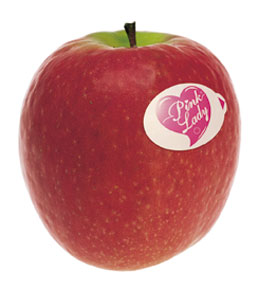 I only chose the Pink Lady because my darling friend Joan Ransley recently won a prize in a food photography competition they ran.  Joan is my favourite food photographer.  My pix are so pants in comparison.  Her food pictures make me drool…

After dinner me and Mr R got a bit smashed and stayed up late “gassing” as he calls it. Much was discussed including the forthcoming Joan Crawford Virtual Reality Book Launch Party.  Mr R said it will be a bit like the Vincent Price Cookalong, only this time, Joan’s coming! 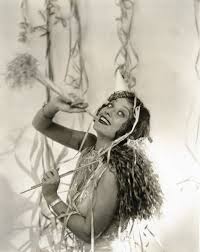