One day after living in my rented fourth floor flat in a 1930s block for about 3 years, I thought to myself, “I wonder if I can get to the recycling bins through the back door of the fire escape?”  I opened the back door and it was like this… 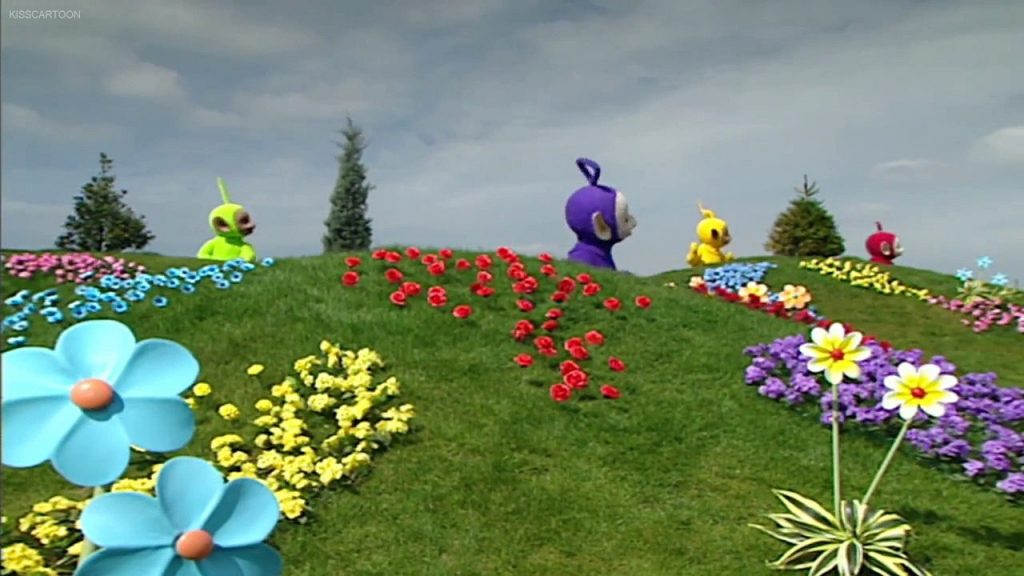 there was a beautiful communal garden out there that nobody had told me about!  Oh my word!  We are so very lucky to have it, and once a year Chloe, the Cedar Court Cupid, organises a garden party and it was last Saturday.

I’d got myself into that weird mode of thinking – “I’ve got too much to do, I can’t go, I won’t know anyone, I should’t go…”  But Battenburg Belle coached me out of my funk, and I made myself go, and of course it was loads of fun. 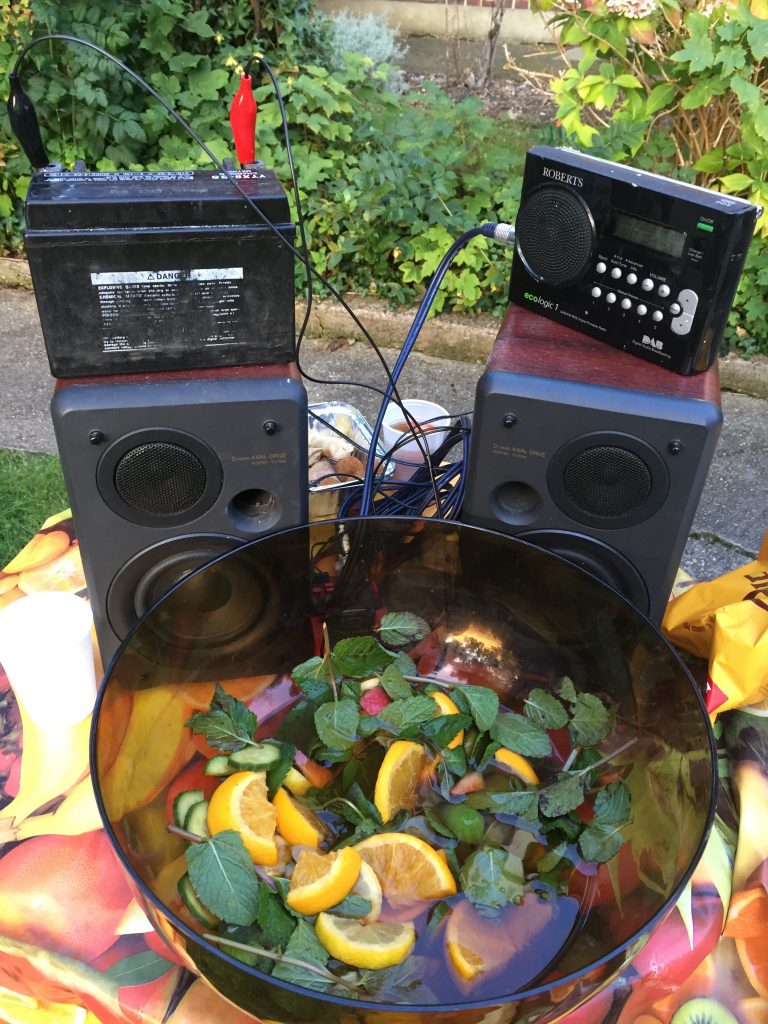 Gary and Akiko who live in the OTHER part of Cedar Court scrumped some apples from the garden and gave me some.  I made an apple pie with them and it was GOOD. 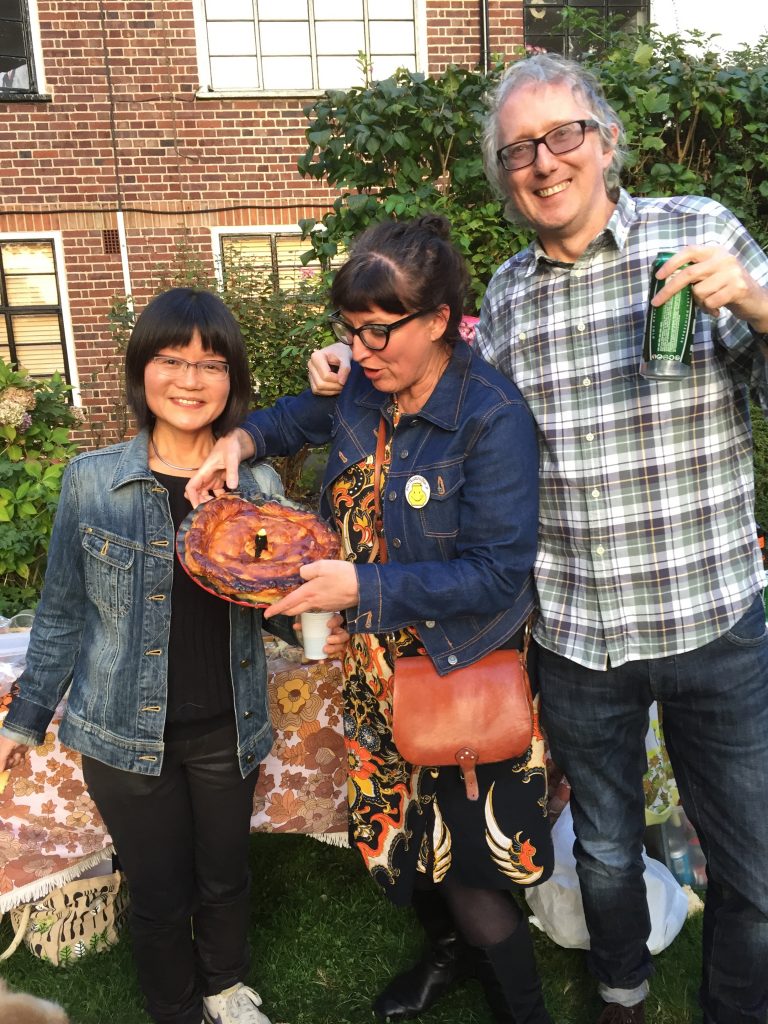 Our legendary caretaker Courtney was there.  I think he has the best answerphone message of all time.  He’s Jamaican (I think, but I’m going to ask him to double check) so you have to imagine this being said in a strong accent, very slow and relaxed, when you are phoning him because it is the middle of winter and suddenly the communal heating is broken.  The message goes like this: “Hello… this is Courtney… you’ve got the right number, but it’s the wrong time…” 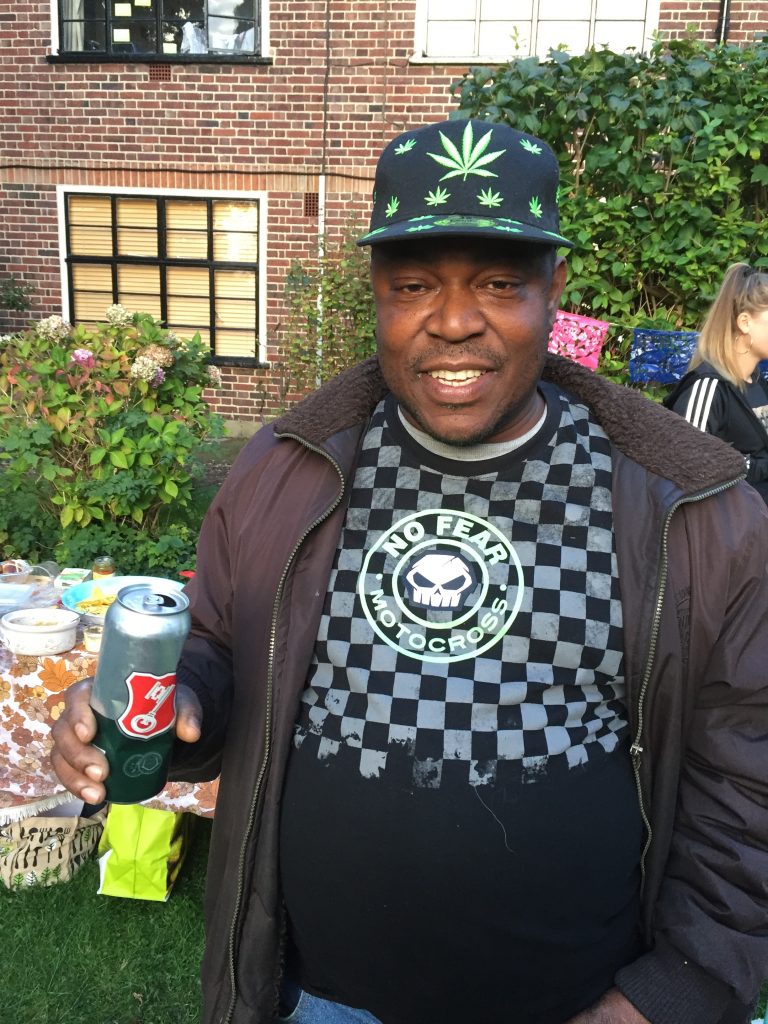 He had a bit of my apple pie and I said: “What do you think Courtney?” and his response was: “Don’t ask me when I’m eating it, ask me when I’ve finished it!” which cracked me up.

I liked John’s recipe, cooking the apples in pineapple juice seems like a damn fine idea to me.  They came out a bit mushy, but I think Akiko may be right.  Even though the scrumped apples were BIG and they looked like cooking apples, maybe they were actually just large eating apples… 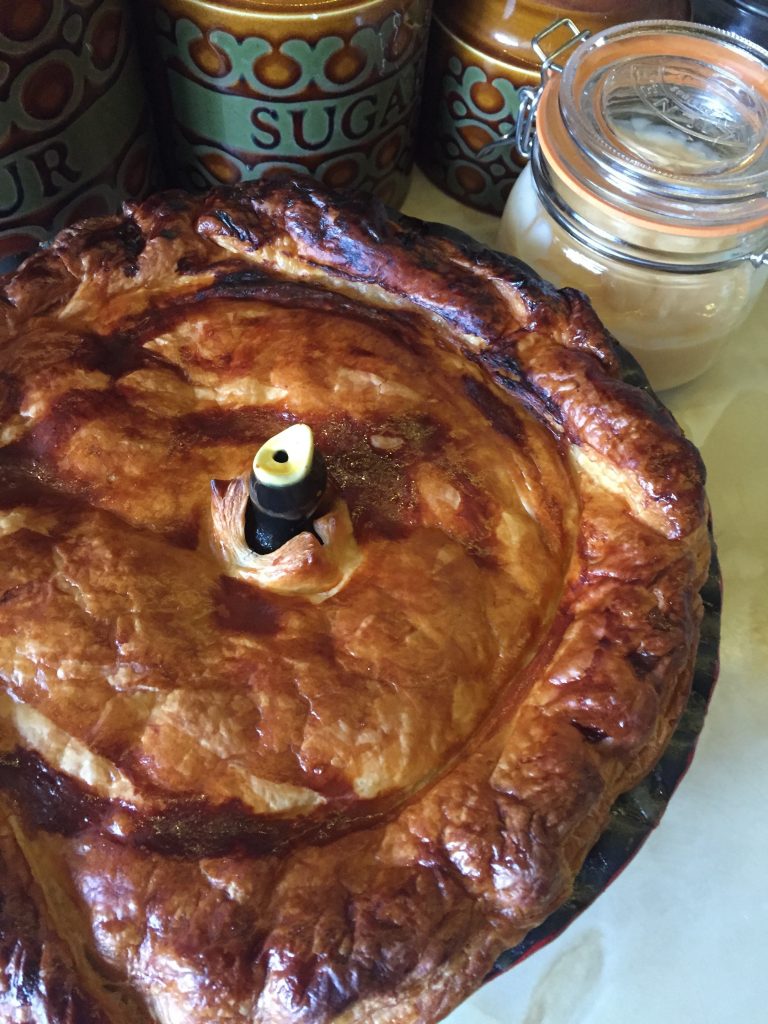 It’s very hard when hearing the name John Carradine not to think of that catchphrase of the 1970s, “ahhhh, grasshopper…”

but that’s DAVID Carradine, son of John.  John appears in House of the Long Shadows with Vincent Price, so this recipe is a good one for the Vincent Price Co*Star book I’m working on with my chum Peter.  I will make it again with Bramley apples and cook them for a little less time.   Mmmmmmm – apple pie!

A little cream or a beaten egg

Use any good pie dough recipe to make crust

Bring the pineapple juice to a boil the pineapple juice.  When the mixture boils, add apples and cook them slowly (be sure they are uncovered) until the fruit is tender, moving the apples from time to time to make sure they are always in the syrup.  Lift the apples out carefully (keeping them whole) and lay in a pie plate that has been previously lined with un-baked pastry.  Dissolve cornstarch in a little cold water and add this to the syrup.  Cook several minutes or until the syrup thickens, add vanilla and the butter then pour over the apples in the pastry lined pan.

You can either cover the pie with pastry dough, making sure there are vent holes, or cut dough in stri[s and place cross-wise over the top.  Be sure to brush slightly with cream or beaten egg mixed with water.

Bake for ten minutes and then reduce heat to 350 degrees F / 180 degrees C / gas mark 4 and bake for about thirty-five minutes.