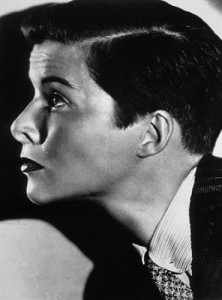 “I’ll be a boy… and rough and hard!”
I’d forgotten all about Katharine posing as a boy in “Sylvia Scarlett”. Maybe it would be a good double bill with Louise Brooks in “Beggars of Life” or even better, Jessie Matthews in “First a Girl” my favourite of all her films…

By a weird coincidence we have had another report of a power cut caused by a Silver Screen Supper this week. Well, it was probably caused by a raging Texas storm, but I like to think it was the power of Katharine’s eggplant dish that did it.

Gene reports that the recipe could do with some oomph – she added Parmesan cheese, garlic and rosemary which I think is a mighty fine idea. We shall have to fiddle with this recipe quite a bit if it is to make it into the book. As Gene observes, “I think it was her long legs and patrician accent that won Spencer’s heart, and not this dish….”

Oh how I do miss the Texas thunderstorms. I have a particuarly vivid memory of driving through a humdinger with Ruth trying to obtain free watermelons from a man dressed as one by the roadside. Or did I just dream that?