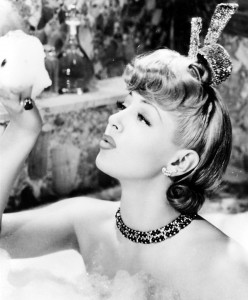 “I would rather lose a good earring than be caught without make-up.”
I know JUST what you mean Lana. And I would rather wear a sparkly hairpiece like this than a shower cap when taking my morning plunge. I may ask my personal milliner Shellac Sister Veronica to rustle me up one of these so I can glam it up in the tub like Ms Turner.
We have our youngest Silver Screen Suppers participant! Baby Peggy over there in Austin Texas already has an appetite for Lana’s Salsa. I am so pleased that the recipe was attempted by a resident of the Lone Star State. Back here in the UK I’m not sure most cooks would know the difference between a poblano pepper and a hatch green chilli but Eve sure does.
Mmmmm Mexican food. I am MISSING Austin. Not least because in her feedback form, Eve mentioned the phrase “pico de gallo” which would have meant nothing to me were it not for the Taco Shack a hop, skip and a jump from Ruth’s place in Austin. No quesidillas, chimichangas or enchiladas out here in Herne Bay. But plenty o’ fish & chips.
Share33
Tweet
Pin1
34 Shares