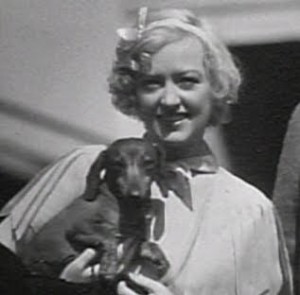 “Gandhi had eaten the whole welsh rarebit.”
I wonder if this is the very same doggie that ate the Welsh Rarebit Marion was so looking forward to at San Simeon. I laughed so much when I read her story about it in “The Times We Had” and it’s a perfect anecdote to accompany her recipe in the book. I read the story late at night and was so tired I didn’t blink an eye about Gandhi being at San Simeon watching movies and eating Welsh Rarebit late at night. It was only in the morning I remembered that one of Marion’s dogs was called Gandhi.

I’ve just eaten TWO slices of Rarebit and very nice it was too. The mixture was a bit runny and Marion didn’t specify grilling it so I did it just as she said and just poured the mixture over the toast and scoffed it. Yum.

It’s Marion night in Crouch End tonight. I am now going to turn the TV off and write the first draft of the mini biog that will accompany Marion’s recipe in the book. What a shame her movies are so hard to get hold of on DVD, I could have rounded the evening off with a screening… Instead I shall start planning the Sunset Boulevard lunch party I am having in February. Gloria Swanson’s Caviar Canapes here I come!