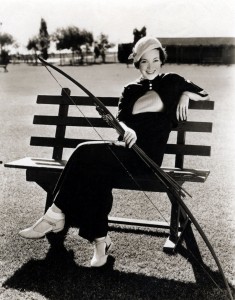 “Cheetah bit me whenever he could.”
I just adore this picture of Maureen – she’s all aquiver – boom boom.

Oh what fun to get feedback on the recipes, there sure are some erudite chefs out there. Marion made me laugh with her suggestion that we change Maureen’s recipe to include 12 shop bought cup cakes. She wrote: “I realize Maureen didn’t have time to bake from scratch. She spent the good part of a decade swinging through the trees with her mate Tarzan. ” Mind you, even though Marion herself has a cookbook coming out soon she sympathizes, “I don’t even want to make sponge cake, so who would?”

She also reported on the results of of her testing Fred MacMurray’s Chocolate Fudge Upside Down Cake: “This is not a pretty looking cake but it’s delicious”. I wholeheartedly agree. The recipe reminds her of one in her collection that goes by the name of “Volcano Cake” which is perfect – chocolate fudge lava!

Marion loves Fred in “No Time for Love with Claudette Colbert where he displays his hunky body ripping off his shirt while digging a tunnel, and also “Take A Letter, Darling with Rosalind Russell” where a female executive uses Fred as a little bait for the wives of her advertising clients. As Marion says so eloquently, “Gee, they just don’t make them like that any more!“