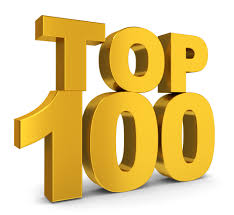 Recipes with weird names are catnip for me. Vincent Price’s Hotchpotch of Curly Kale immediately springs to mind. Elvis Presley’s Hush Puppies is another, but Phyllis Diller’s Garbage Soup is the winner in this category. This fabulous recipe appears in many incarnations in recipe books and magazines, but this version from the New York Times seems apt right now as so many of us are “home alone” and “sometimes the pleasure of your own company is party enough.” 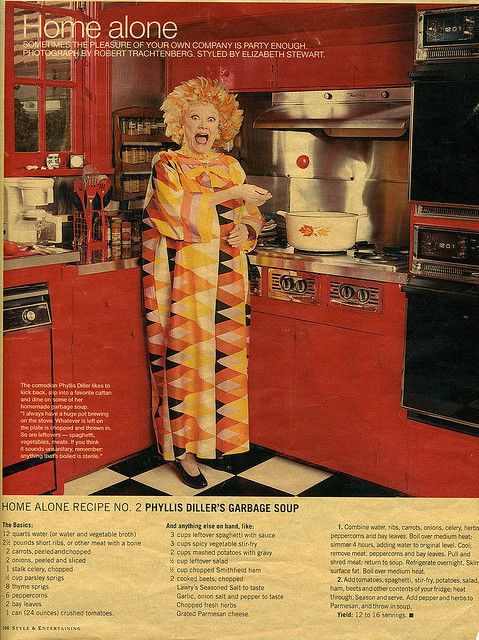 Here’s how the version of Phylis Diller’s Garbage Soup begins in the The Celebrity Cookbook of 1966.

“You cosy up to your butcher (I hope he looks like Cary Grant, he probably doesn’t) and ask him for a soup bone. This will thrill his body. Nobody asks for a soup bone. How many people own a Great Dane??? You take this home, and this is the beginning of Garbage Soup for the week.” 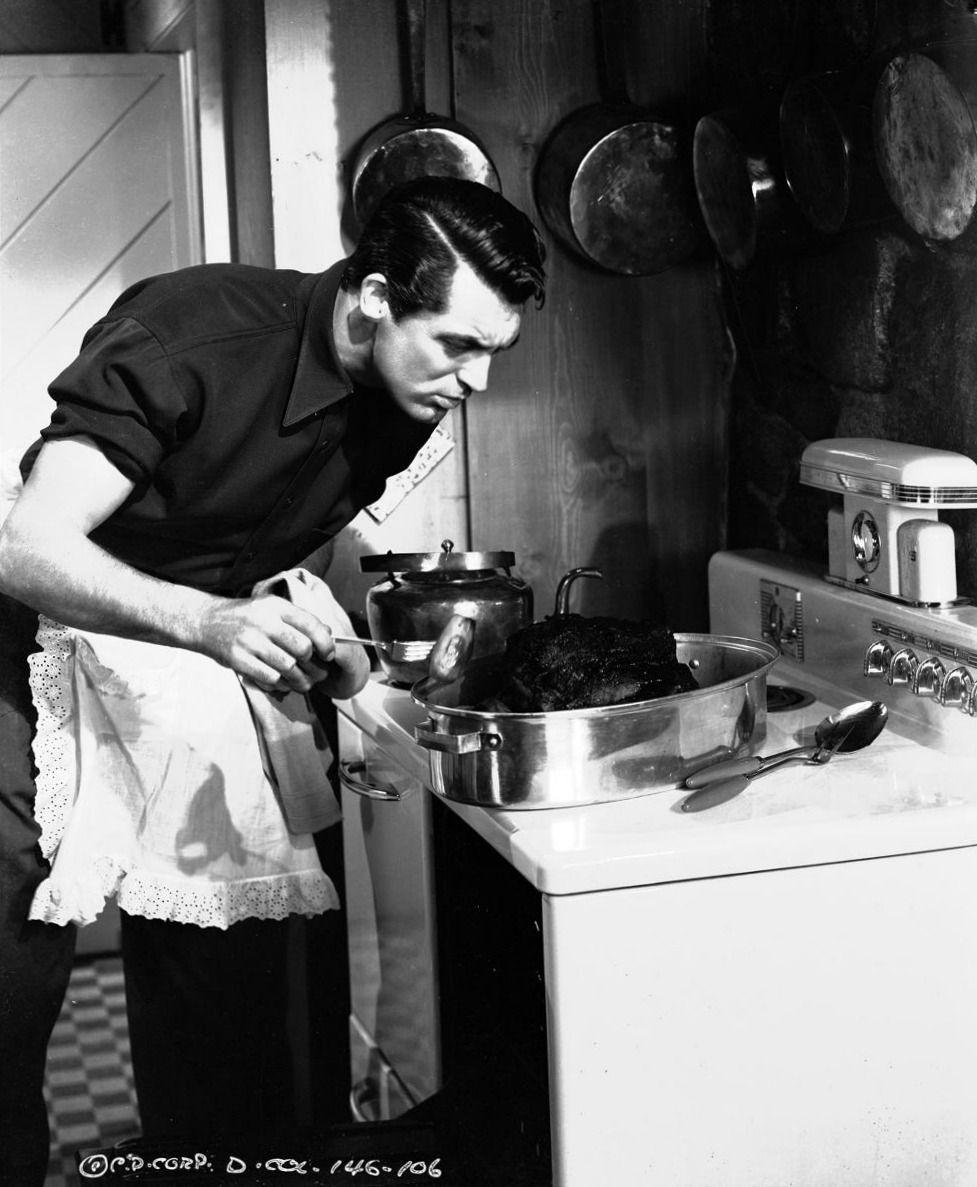 When I have overindulged in the vegetable aisle, and my salad drawer is full of odds and ends going a bit slimy, this is the recipe that forces itself upon my mind. I haul out my mighty chopping board, hoik my cast iron casserole dish out of the low cupboard and wield the big knife like a Samurai. 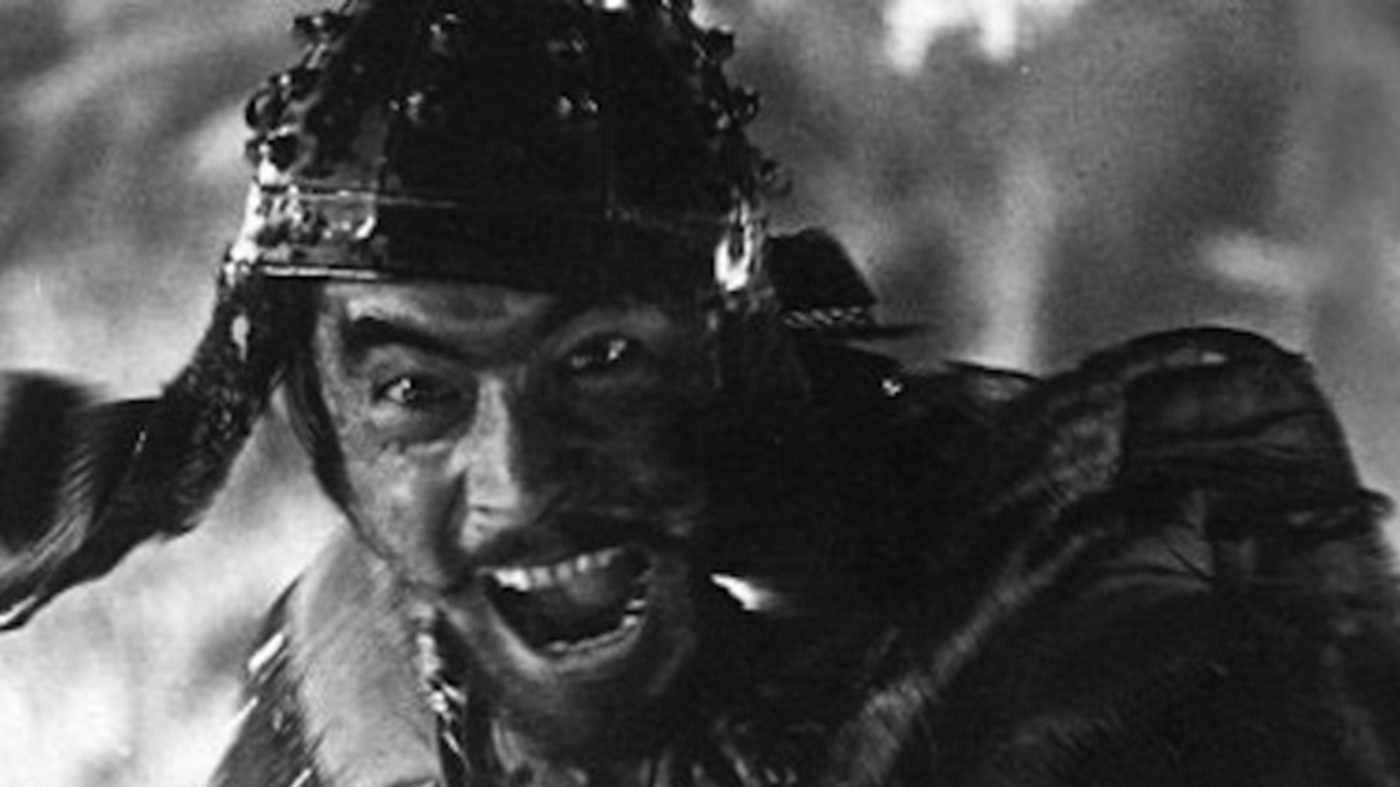 The making of garbage soup is a soul soother and a smug maker. Everything you are half thinking of chucking into the bin can go in. Phyllis says that absolutely anything can be added to the mix apart from pickles or jello. Her recipe is a glorious template, and to my mind, you could jazz it up with chillies or spices and all kinds of wonderment, but I never do. I like to taste the individual vegetables and feel vindicated and victorious that I took the time to chop them all up rather than consigning them to the compost. 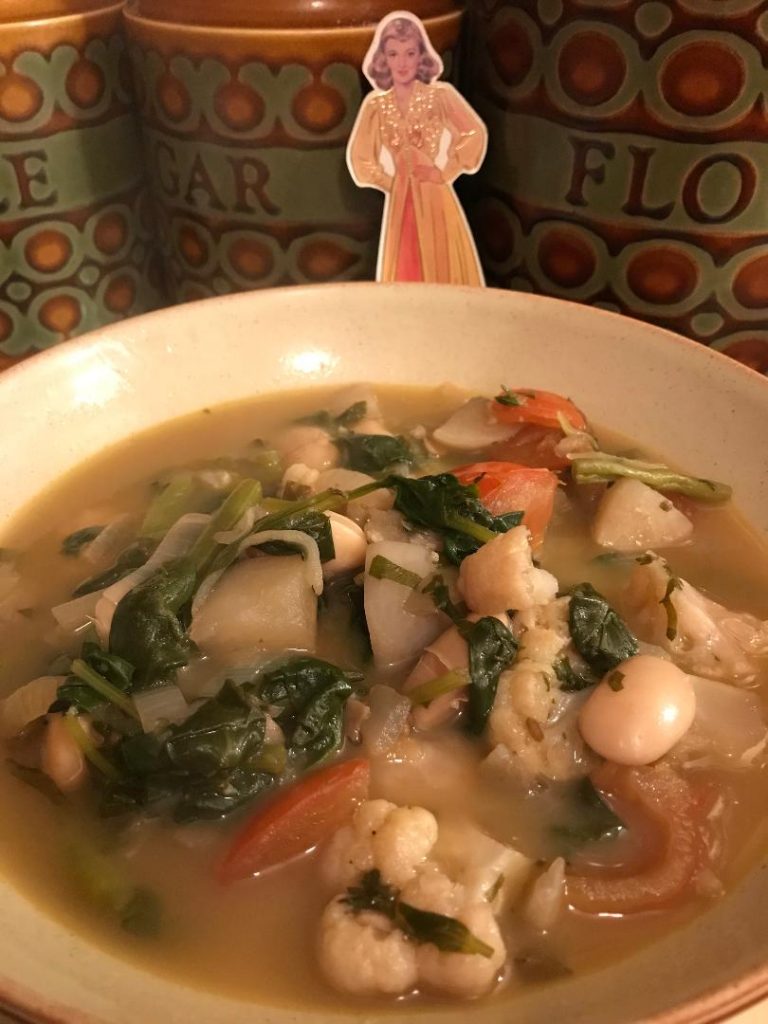 Do I ask my butcher for a soup bone? Hell no, and not just because he doesn’t look like Cary Grant. If you have such a thing, by all means, bung it in, if not that lazy cook’s friend, a stock cube will do just fine. Every time you construct a massive vat of this delicacy, you will find it has a different character. The fact that the mishmash you have created has an actual name – GARBAGE SOUP – will silence anyone who dares to criticise your superior soup skills. Super-duper soup!

The Garbage Soup I made most recently was basically an attempt not to waste any of the veggies I PANIC BOUGHT for my ultimately futile two week self-isolation. I was hoping to spend Christmas with my parents and I wanted to keep the risk as low as possible. I didn’t even go to the corner shop. But alas, a trip to Suffolk from London was not to be.  Government banned it. 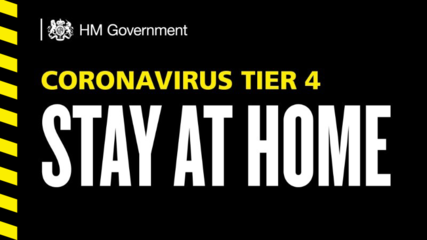 So here’s a roll call of what was in this latest of greatest of all soups – onions, shallots, carrots, celery, sweet potatoes, brussels sprouts, courgettes, rocket (arugula to my US chums), 2 little tomatoes, a litre of veggie stock and a bunch of parsley. I didn’t add any extra salt or seasoning, firstly because there would be some in the stock cube, but also, because I can almost never resist adding a bit of Worcestershire sauce to my soup. That gives it the umami boost it sometimes (but not always) needs. 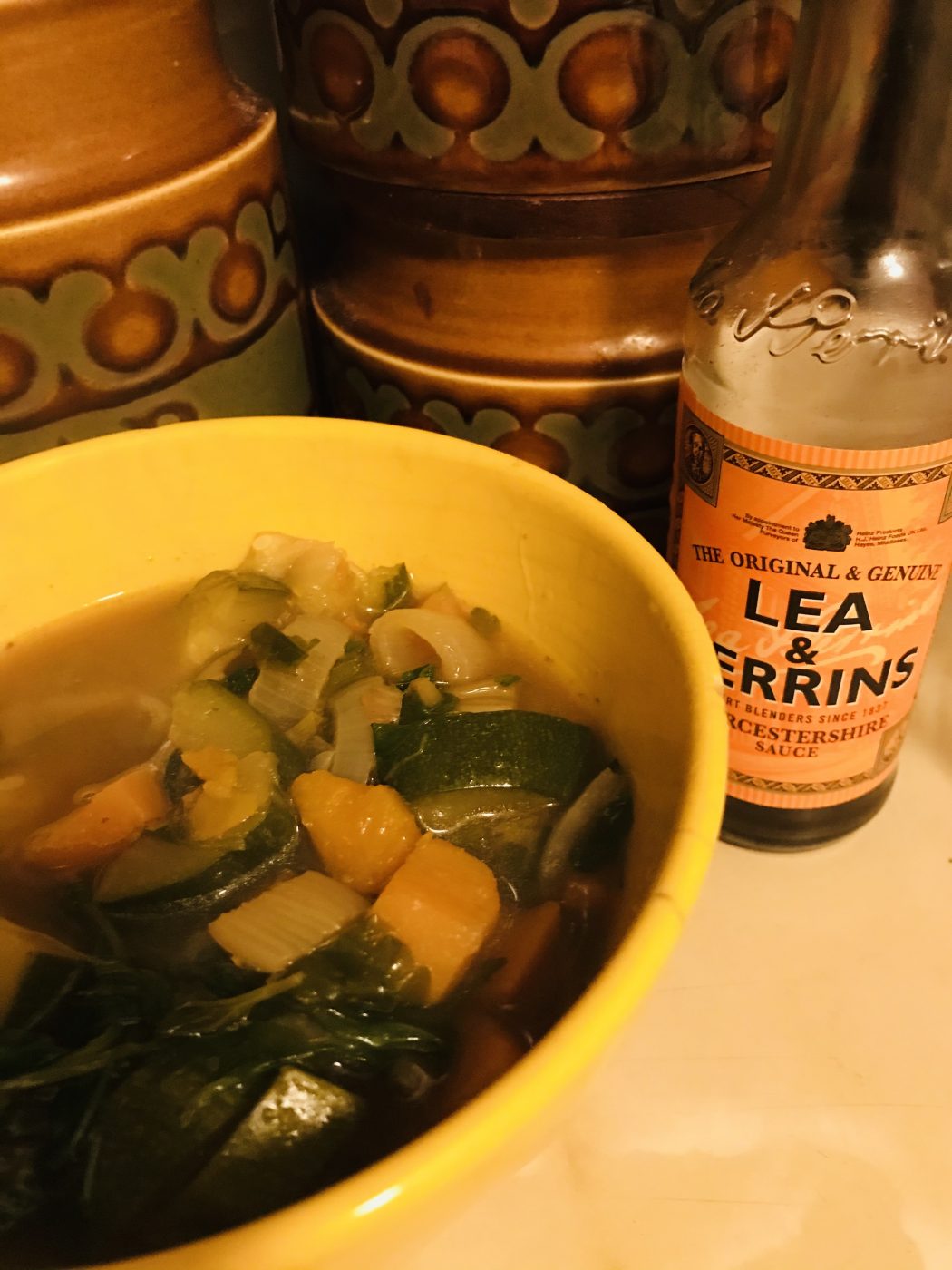 That is another great thing about Garbage Soup my friends – once it is made, and dished up into a bowl, you can add whatever the hell you fancy to spice it up. I love this soup SO MUCH that I have decided to make it the very FIRST of my Top 100 Movie Star Recipes. I have no idea how long it will take for me to write about 100 but hey, I’m in Tier 4 lockdown and have been ordered to STAY HOME so why not start now?! 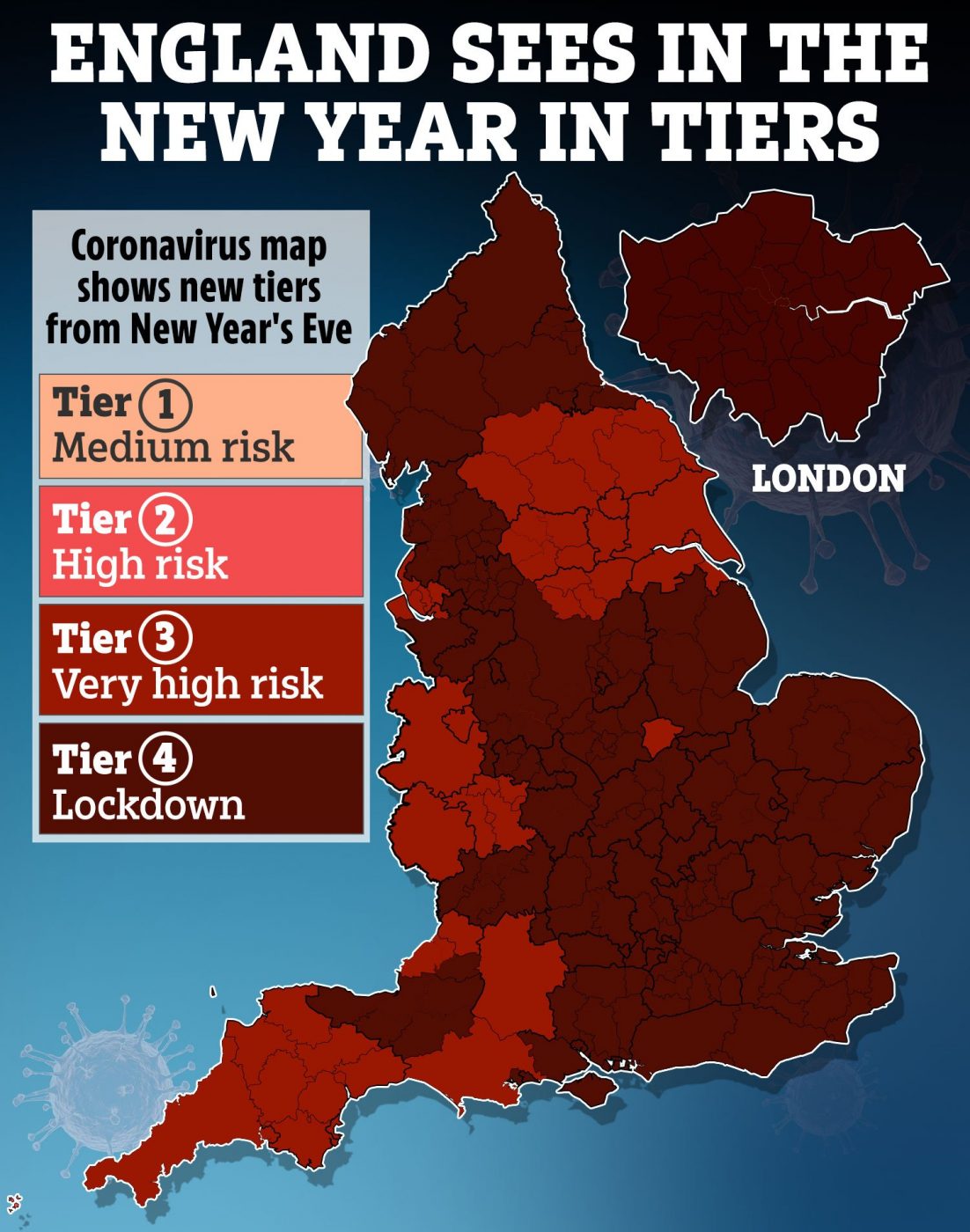 As these “Top 100” posts will probably be the last I say on the matter of each recipe, here is a slightly different version of Phyllis’ soup but with the same panache!

I have not yet managed to find a clip of Phyllis on the Mike Douglas show online, but will keep on looking… 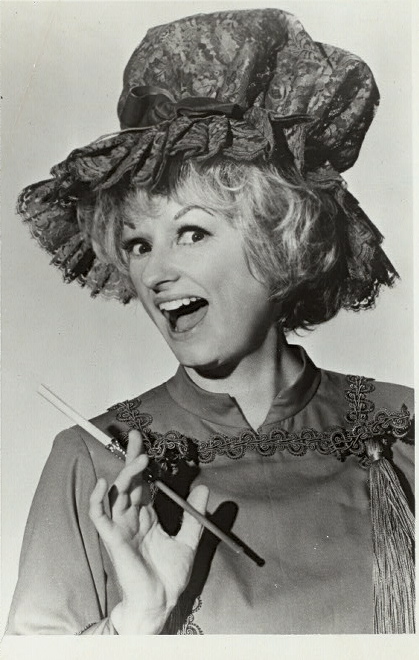