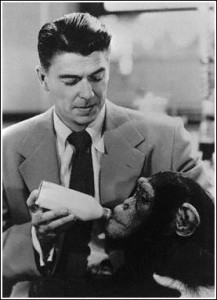 “All great change in America begins at the dinner table.”
And possibly all over the world too. I suggest that we all work towards world peace by eating like the stars!

I’m always intrigued when test cooks choose a persona of a different gender. So it is with Oliver. He / she sent feedback with an apology that it had taken so long as, “the corned beef sat ominously on my shelf for a while before I was brave enough to try it.” I’m the same with the Tea Matzos! Maybe next weekend for the Matzo Ball Soup. I dreamed about it last night.

Oliver – like others who have tried this dish – suggested roasting the peppers rather than boiling them. And s/he loved the popping of an egg on top at the end, “providing protein so the post-war generation grew up big and strong…” Ronnie’s dish was proclaimed as being definitely worth trying as a quick journey into the past and Oliver summed it up thus, “It really felt like retro gastronomy – the techniques and the result were so incredibly different from our Nigel Slater dominated, balsamic vinegar and olive oil idea of cooking nowadays.”