My darling Shellac Sister Jane sent me an email back in February which said:

“I’m just about to attempt this … have all ingredients including two pineapples looking like they need rum and umbrellas … and one hopeful dog sitting on her mat drooling and wondering why we don’t just have the chicken raw ..”

Her beau had been suspicious for days about the sudden appearance of pineapples in the house, for Jane is not known for her presence in the kitchen, but she locked herself in one day and made this all by her own self!

Later on she sent me this pic – I loved her caption for it:  “Who is more surprised?  Trix or the pineapple?” 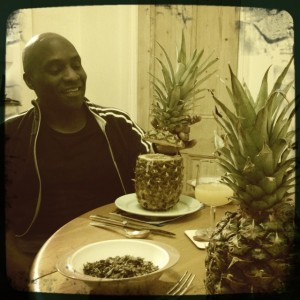 This is probably my very favourite Silver Screen Suppers recipe EVER and was the recipe of the month a while back.  Here is the recipe again, it sounds a faff but there will be enough of Vincent’s Supreme Sauce for a few versions of this.  I’ve got some in my freezer right now so I can feel a pineapple calling…

I love the fact it serves one – for me it was the perfect super-indulgent spinster’s supper.  But of course you just multiply the ingredients for a romantic supper a deux or even for a rather fabulous dinner party.  Imagine the smiles when you take your guests through to the dining room and they have a whole pineapple each full of scrummy chicken in a creamy sauce – divine.

Take one small, ripe pineapple.  Cut off top and set aside.  With a sharp knife cut out pineapple meat, leaving shell about 1 inch thick.  Save fruit to be used some other time.

Melt the butter in a saucepan and simmer chicken, mushrooms and shallots lightly in the butter.  Add sherry and ½ cup cream.  Allow sauce to reduce slowly for 5 minutes.  Add ½ cup supreme sauce.  Mix 1 egg yolk with a tablespoon of cream and add a little of the warm sauce, mixing well.

Add the warm egg-cream mixture to the saucepan gradually, beating with a whisk.  Season with salt and pepper.  Do not allow chicken and cream sauce to boil.

Preheat pineapple shell by immersing it in hot water for 10 minutes while you are making the sauce.

Place chicken mixture inside the pineapple.  Top with slivered almonds and shredded coconut and cover with pineapple top.  Serve with wild or steamed rice in a separate bowl.

This is a Chicken Veloute with extra cream so if you have some of that around the place you are halfway there!

Put all the ingredients except the second portion of cream into an electric blender.  Turn motor on low speed.  When blades have reached full momentum, switch motor to high speed and blend for 30 seconds.  Pour into double boiler and cook over simmering water for 15 minutes, stirring occasionally.  Add extra cream to the hot sauce. 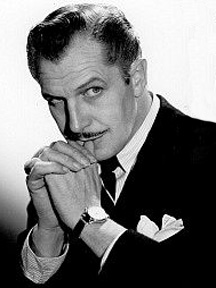 Well done Jane – Vincent would have been proud of you!