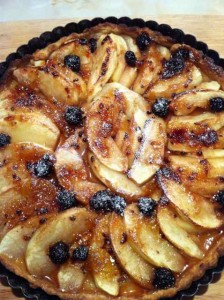 Because I got smashed on cocktails on Thursday at the Kinolibrary launch I was a bit under-prepared for my dinner party on Friday but Cathy came to the rescue with a pastry case for my apple tart.  There wasn’t enough pastry for a lattice but I think it looked just dandy without.  Mary forbid me from getting up on the bar stool to reach a second jar of apricot jam so it was a mixture of apricot and a tiny jar of apple and blackberry.  Bloody lovely.  I think the little blackberries add a certain something.  I’ll type up Vincent’s recipe sometime – it’s simplicity itself – especially when you have a lovely chum who makes the pastry for you. 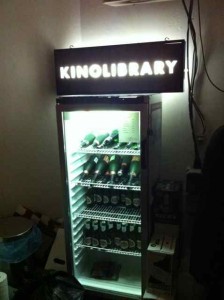 Yinzerella over at Dinner is Served 1972 would have been proud of me on Thanksgiving Day – I was eating hot dogs at aforementioned Kinolibrary party. I took the following picture to prove that hotdogs are GROOVY in London right now and she’ll be pleased to hear that even though Heather thinks the idea is RIDICULOUS she is coming to Bubbledogs with me on my birthday.  I wish my birthday was a Wednesday so that it could be a Wiener Wednesday.   Alas, because Bubbledogs prides itself on being an upmarket “Champagne and gourmet hot dog bar in Fitzrovia”  they won’t be serving frankfurters inside a potato, I don’t think I will ever experience that unless I can get myself to Yinzerella’s in Baltimore. 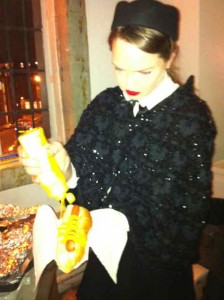 It was the hippest, coolest work related event I’ve ever been to and I wish Jenny and Serena great success with their new venture.  They were showing films that were making me drool – especially the beauty contest material – yum yum.

I have another person on the list of people I am going to type a letter to on my typewriter.  Mr Morrison.  There has been a REVOLUTION at my local Morrisons.  They have a funky new irrigation system for their fresh veggies – it’s like an AMERICAN supermarket in there now.  There were THREE TYPES OF KALE and some fruit and vegetables I’ve never seen in my entire puff.  Glorious, I am very happy. 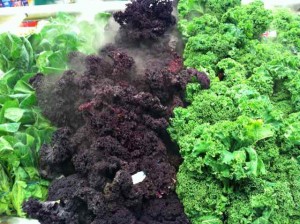 Thanks for the apple tart Vincent – I might have to put you back on the shelf for a while next to Richard O’Sullivan otherwise this blog is going to turn into the Vincentennial Cookblog Mark 2. 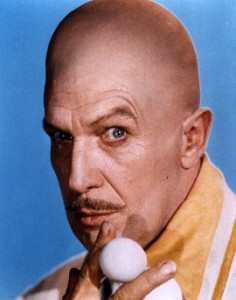