My lovely chum Michelle had a bonfire party in her garden a couple of weeks ago and it was so much fun.  She has commandeered the communal garden behind her flat and made it like a little grotto. It was festooned with tea lights, had a cosy little shed and even a chemical toilet!  It was like a festival in her very own back yard.  We had:

Michelle and Tony made traditional bonfire party type fodder – a hearty and fabulous stew, blackened sausages on the barbecue (just the way I like ‘em), crispy baked potatoes and something I don’t think I have ever had before – Parkin.  Oh yummy, yummy, delicious!  So I had a go at making one for fireworks night at Mr R’s 13th floor flat with an amazing view over a vast part of London.  It seems to be a traditional cake for this time of year. 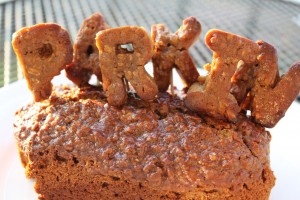 OK, I admit, this is not my Parkin – my Parkin photos were pants and besides, I am hoping the parkin pickin person who posted this parkin pic won’t mind because they have a WHOLE BLOG about Parkin – Iheartparkin – I know Lauren over at The Past on a Plate will like this – she likes Parkin too!

I have translated Wendy’s measurements from Imperial to Metric using Delora Jones’ fabulous book Measurements for Cooking.  If you are a food blogger who does a lot of recipe translating (from American cups to metric or pounds and ounces to metric for example) this should be your bible.  It’s by my elbow at all times.

Put syrup, treacle, lard and milk into a pan and warm it till all is melted.  Mix all dry ingredients, then pour into hollow in the middle all that has been melted.  Add egg last.

Put in greased meat tin with greased paper and cook in a moderate oven, 40 minutes.  Keep for several days before serving.

I think I may have use the wrong kind of oats as Delora notes: “Oatmeal… refers to whole oat rains (groats) that have been cut into pieces – it does not refer to rolled oats or instant oatmeal.  Hmm – I think my oatmeal was bought when I was attempting to be healthy a while ago and eat porridge in the mornings.  Fact is, I don’t like porridge.

I haven’t tried the Parkin yet as me and Mr R were so full of the mulled wine, “13th Floor Hot Dogs” and baked potatoes topped with my guilty pleasure STAGG CHILI

that we didn’t have room for Parkin.  Still Wendy advises (as do many others) to keep it for a while to mature so I will report back.

Being up on the 13th floor watching Diwali and Guy Fawkes Night fireworks going off in a million different pockets of London was amazing.  What a great spot to be in – on the balcony of a flat looking over Hampstead Heath right the way across to the South Bank – to see London at its best.  Lovely.