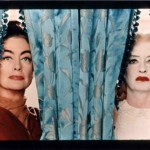 “I only want to talk about the nice things.”

A superb afternoon and evening incorporating much Joan and Bette madness was had today.

The noodles were very strange but tasty.  Incorporating half a pound of cheese (a whole standard supermarket portion plus a bit extra) plus almost a whole brick of butter (we left about half out) AND an American cup of cream.  These were VERY RICH NOODLES.  After dinner Rosalind requested a kaftan, which I provided (the Bulgarian Kaftan no less).  She then lay back on the sofa stroking her belly which had expanded to such magnificant proportions we decided that she had a “noodle baby” in there.  She gave us a scary rendition of “I’ve Written a Letter to Daddy” on her way to get more beer…

The Brown Bette was nice but had a few too many sultanas in for my liking.

We watched “Whatever Happened to Baby Jane” and I think everyone except Charley snoozed through a bit of it, plus all the extras on the DVD which meant that suddenly it was 11pm and everyone had to go home.  Shame.  Of the 18 beers and two bottles of wine between 4 we managed to keep up a steady drinking pace.  I am hoovering up the dregs…

Before she left Rosalind and I sat by the window smoking roll-ups made with licorice papers and debated whether the correct pronunciation of Bette was BETT (as in Cousin Bette) or BETTY (as in Ugly Betty).  Rosalind’s verdict?  “Well she’s dead now so she won’t care what we call her.”  Which I guess is true.  One of the DVD extras clinched it when Joan said to an interviewer that Bette would hate him calling her BETT so I guess that nails it.

At some point in the evening Charley had said that he fancied Bette.  I said, “More than Joan?” and he said, “well I fancy her too…  Ideally I’d like a three in a bed with the pair of them.  I wouldn’t care how old they were…”  That’s my Charley!