I am on a diet.  Boring but true.  As I was home alone on Bank Holiday Monday I thought I’d check out what Diana recommended for breakfast on the X-cel Diet. 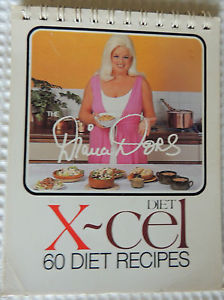 I have much to say about Diana and her diet.  In fact, am slightly obsessed with it.  As I am with all things Diana really…  And look!  She liked sparkling champagne perry!  I think Golden Godwin was a rival to Babycham – or maybe an earlier incarnation.  More research needed… 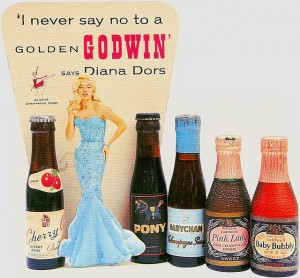 Diana promoted the X-cel diet on the TV-am breakfast show here in the UK in 1983. 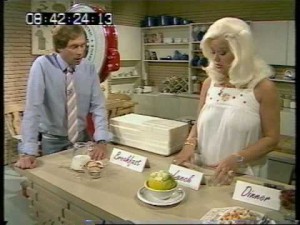 I’m lucky enough to work with the TV-am collection as part of my job as a film archivist.  I have it all at my fingertips.  I am just so full of admiration for Diana.  Rather than hiding away when her figure expanded, the former bombshell got to grips with her weight on national TV, weighing in every week in her quest to lose 52 pounds by her 52nd birthday (it might have been 53 by 53 – I’ll check).  She did it too.  She was supported by the “Dors Dozen” – twelve other folk trying to lose weight. Here she is with one of them. 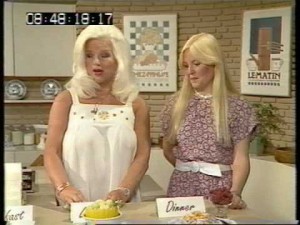 I love the segments of the show where TV-am cameras go to the home of one of the dozen and they give a cookery demo of one of the recipes.  I am very nosy about other peoples’ kitchens. 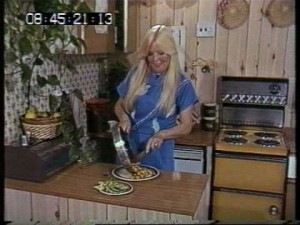 I was really, really excited when the ebay machine informed me that an X-cel Diet book was available, I didn’t even know one existed.  I’d put a “favourite search” in for X-cel as I was actually lying in wait for one of the calculators that Diana promoted on the show, a groovy way of keeping track of calories. Because of my stupid collecting mentality I really want one of these even if it has long ceased working…

Anyhow, I bid on the recipe book and got it – huzzah!  I’ll be trying out a few of these recipes while I’m on a mini diet.  First up was the Breakfast Bean Omelette.  Here it is before folding French style. 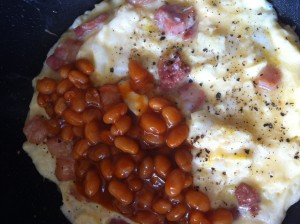 It was very, very tasty. The X-Cel Diet cookbook is in my flat SOMEWHERE so I’ll put the proper recipe up soon, * recipe is now here – click to go to blog post with recipe * but from memory I think it was two eggs, two teaspoons of water and a couple of rashers of bacon for the omelette, then about half a small can of beans warmed through before spreading on one half. 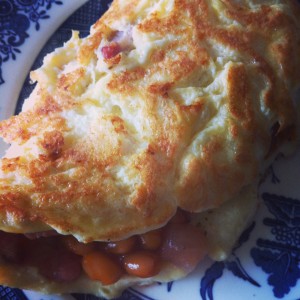 I used HEINZ baked beans (of course) but the fiery chili ones which is why they look so red.

Eggs, bacon and beans in one fluffy package – delicious! Thanks for that idea Diana! 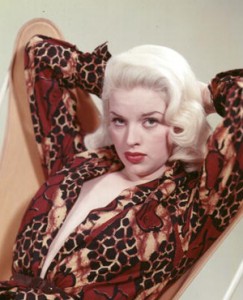