The beans I used in Richard Basehart’s Frankfurter and Beans were Heinz Beanz pimped up thanks to a Sharon Gless recipe, so that dish was a kind of Columbo/Cagney & Lacey mash-up. 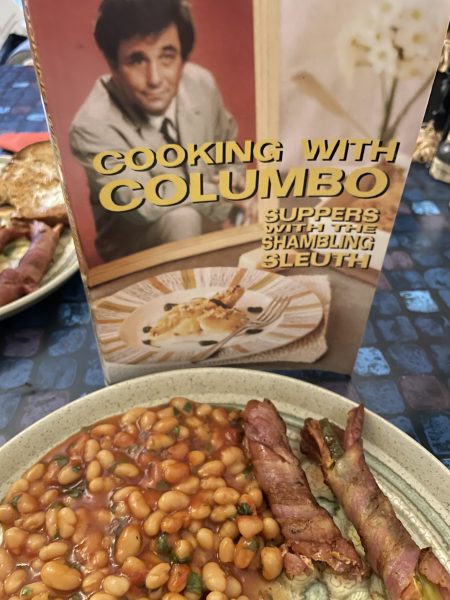 I’ve made Sharon’s beans before and they are GOOD.  A shortcut to beans cooked in the Bette Davis way – dried beans soaked and cooked for hours and all of that jazz. 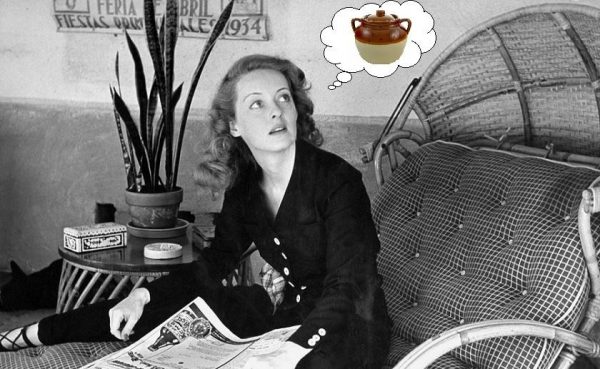 Bette’s recipe looms large in my legend as it was the very FIRST movie star recipe I tackled, way back in 2013 when I was a terrible cook.  If you fancy having a go, skip over here and scroll down to the bottom of the post for the recipe, I had learned a lot about cooking by 2019, that’s for sure. 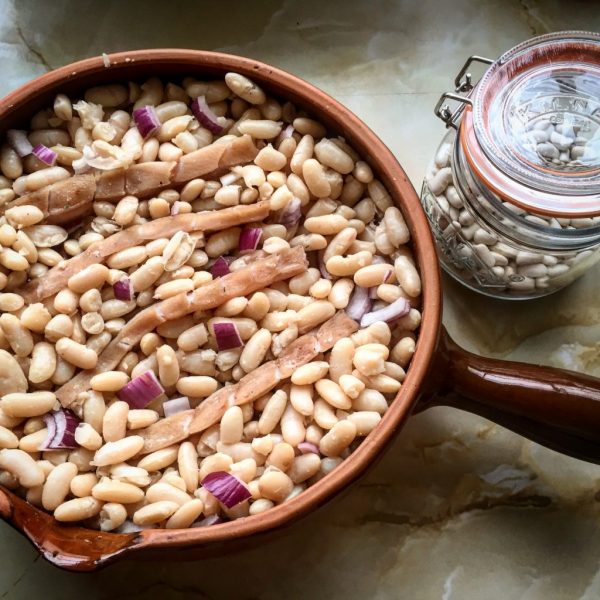 The first time I made Sharon’s beans, I cooked them in the oven, but this time I did it in my cute little mini slow cooker – perfect! 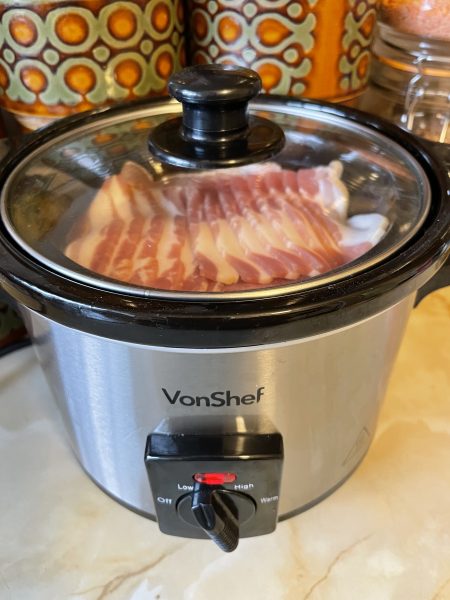 I cooked this on low for four hours and it was perfect.  I did a bit of googling, and next time I’ll part cook the bacon a bit, and then it can be cut up and stirred through the beans when ready to serve.  I think that would make them even more delicious. 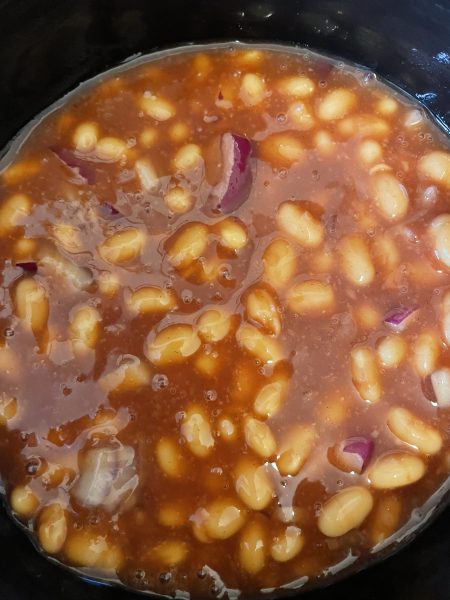 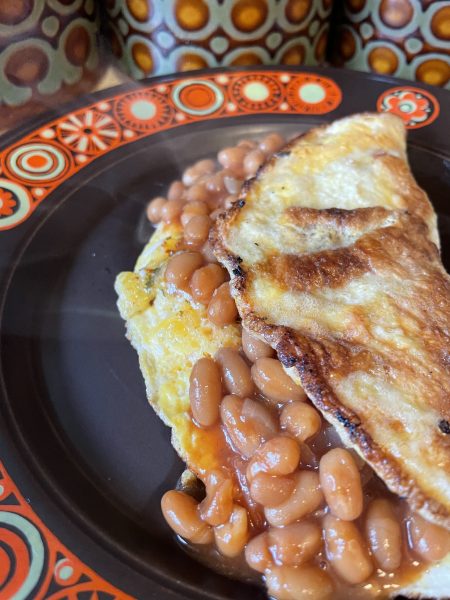 and a couple of days later, some alongside a leftover banger from a Farrah Fawcett recipe which I’ll be writing about soon. 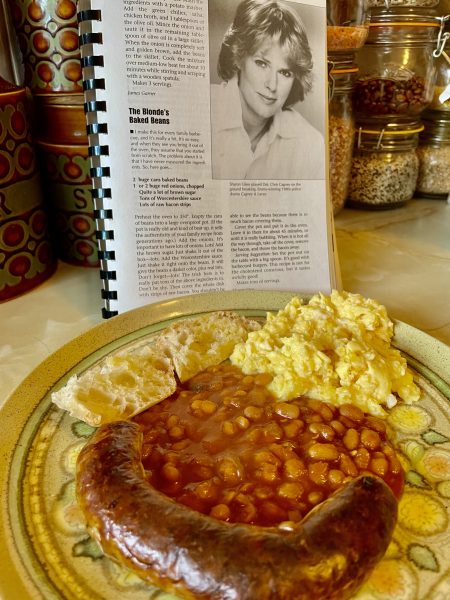 Sharon’s original recipe in The Cop’s Cookbook was very vague, so here’s the way I make ’em.  I go quite heavy on the Worcestershire sauce and light on the sugar, but you might prefer it the other way around… 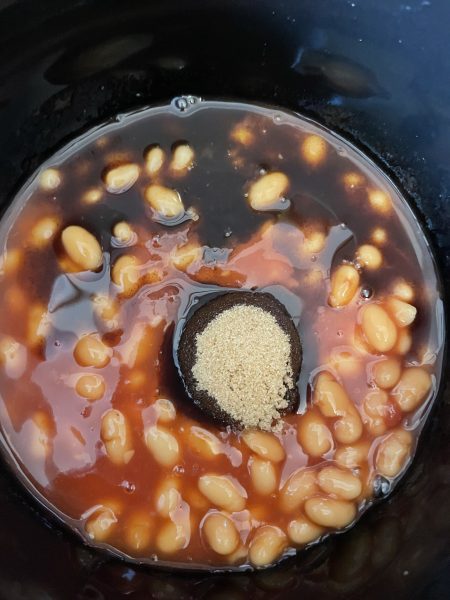 Mix beans, onions, sugar, and Worcestershire sauce together in an ovenproof pot that has a lid.  Cover the beans with bacon.  Put the lid on the pot and bake for about 45 minutes “until it is really bubbling” says Sharon.  When it is hot all the way through, take off the lid, remove the bacon and throw the bacon away.  Et voila!  Some fancy beans to have with your fry-up.

Sharon says: “This recipe is not for the cholesterol conscious but it tastes awfully good!”  In characteristic style, she also says: “Makes tons of servings.”  Indeed it does. It freezes really well so each time I’ve made this I’ve squirreled away a few portions for future Sunday fry-ups.

THANKS, SHARON YOU LEGEND! 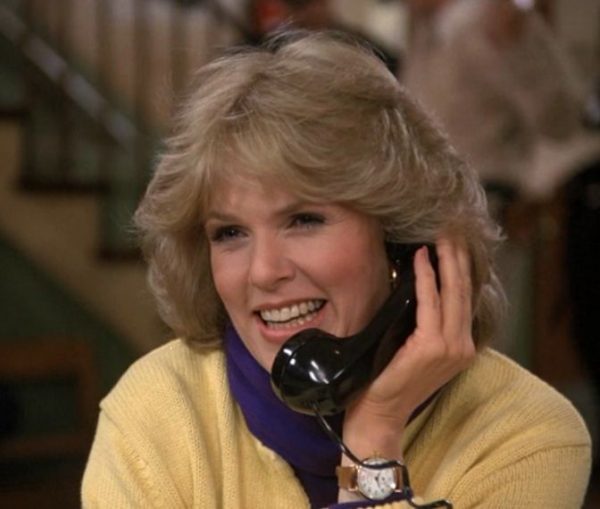