This is the first part of a whistle stop tour of the dishes served at the fourth testing party for the Hollywood Cocktails and Canapés book Nathalie and I are planning to cobble together.  Phew.  Most of these dishes will probably make it into the book, although there was a couple of oddities for sure.  This time we had a theme – silent stars.  Our extra special guest was the lovely Pamela of the fantastic Silent London blog, she gave our event a lovely write up which you can see by clicking through here. We had lots of other fabulous guests too, it was our biggest “do” yet.

Take a deep breath and pour yourself a Betty Balfour cocktail.  Here’s the first part of what was on the menu. 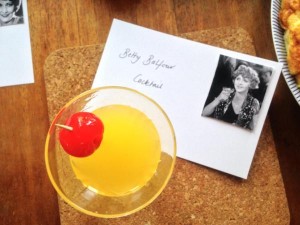 Next up as it is “the month of Joan” it’s her Dip.  We don’t really go in for dip mixes here in the UK and Joan’s required now unavailable Fritos Horseradish and Green Onion dip mixes.  I had to improvise and used the only two mixes I could find (from my much beloved ScandiKitchen) onion and dill.  A pic taken after we’d just started dippin’ 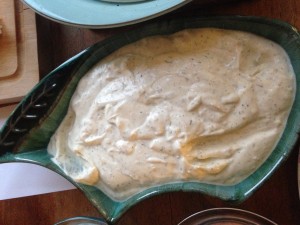 Caroline said this was “a Big Mac in sauce form” – because of the dill I’m guessing.  It was pretty fierce. I’ve got some horseradish dip mix on its way from the States so I’ll have another go at this, maybe for the Joan Crawford Party on the 8th November!

Nathalie’s lovely man David whipped lots of egg whites into submission for the Edith Roberts’ Corn Fritters.  As we had some vegetarians at the party Nathalie fried some in the designated LARD (for what is a retro cooking extravaganza without lard?) and some in vegetable oil.  Before folks arrived I sneaked one of the former and pronounced it to be an “instant lard hit”.  David tried both and decided that the ones fried in vegetable oil were “more corny”. 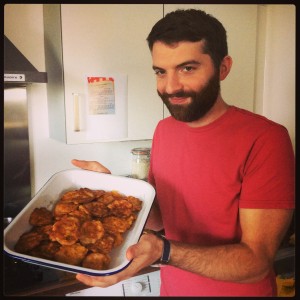 Amy thought that the corn fritters would be nice with maple syrup for breakfast.  YES!  I’m going to do that for a spinster’s Saturday sometime soon…

Nathalie made an omelette to a recipe by ZaSu Pitts.  There was a scary moment before guests arrived when we weren’t sure if the omelette would work (Nathalie had whisked the whites separately and then folded them into the yolks and the omelette looked a bit pasty).  In the end, we should have had faith in ZaSu, it was absolutely lovely and fluffy, and quite a few guests said how delicious it was. 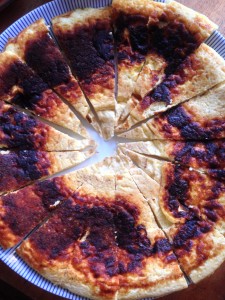 I’d made the Charles’ Rogers Nut and Potato Croquettes the day before and they were yummy.  Quite time consuming but worth it.  Julie was right though when she said that they could have been half the size.  – for canapés are best really when they are just one bite… 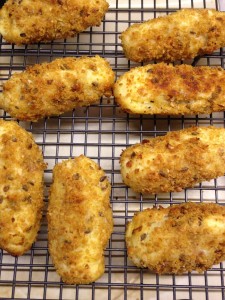 Making these reminded me of Gene Barry’s Kibbee because there’s a secret inner seam of nuts, similar to the pine nut filling of Gene’s Kibbee.  I loved making the little pinch pots out of potatoes and then filling them with the nut mixture.  I’m going to make these again deffo. 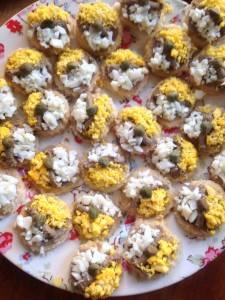 Once all the guests arrived, Nathalie and I didn’t have a chance to talk to each other much.  She did make me laugh when she said of Dorothy’s Canapés in passing, “these took me by surprise”!  Not sure from my notes if it was Lucie or Briony who observed that anchovies “give you a raging thirst”.