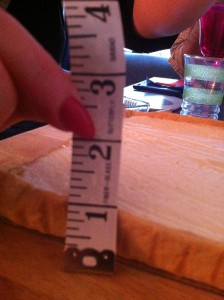 I was sooooooo excited to get my recipe for the first annual Pieathalon, organised by my cyberchum Yinzerella over at Dinner Is Served 1972.  People all around the world sent recipes to Yinzerella and she randomly dished them out for an international pie making pieathalon!  I’ll post links to the other blog posts as they come in below – everyone should be posting up their pie-posts today… I decided to make this for a dinner party I was throwing for my ex boyfriend Vic and his new girlfriend Anna.  I’d somewhat overstretched myself (desperate to impress I suppose), and on the menu was Errol Flynn’s Leg of Lamb with all the trimmings, lots of stinky French cheese and the Mile High Lemon Chiffon Pie.

I wanted to make the pie crust myself and my favourite sweet pastry recipe is by that genius of the kitchen, Vincent Price.  Alas, my Treasury of Great Recipes was at Mr Rathbone’s house, so instead I tried Angel Adoree’s recipe from the lovely Vintage Tea Party book. Pastry fail.  I won’t go into all the ins and outs of it, but this is what I was left with once I’d panicked, tried to drain off some butter that was swimming around on the top of the pastry, and dropped half of it in the sink. I don’t blame the lovely Angel, I blame myself for trying to do too many things at once.  Mr R came to my rescue and nipped up to Waitrose and scored me some ready made shortcrust.  Thank God for Mr Jus-Rol.  I had to calm down a bit… So here is the recipe I was given to follow, sent in by Ashley of A Pinch of Vintage… I wasn’t sure how much gelatin Mrs Albert W. Newhall would have used in her recipe.  How much was in an “envelope” in the 1968?  Is it the same as now?  Is an American envelope the same as a British envelope?  This article may have the answer, but I found it too late… In a British envelope there is about a tablespoon of gelatin.  I went for this.  As I was doing the bits and pieces for the pie whilst doing loads of other stuff for the dinner, I think I probably peaked too early with the egg whites.  I whisked them until peaky, and then got distracted. When I went back to them, they were a bit runny on the bottom.  Maybe this is why my pie turned out flat.

But no matter, it was yummy, even if it was THIN. 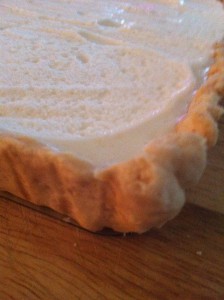 My dessert plates are all at Cathy’s after the Strolling Supper Club, so I asked Mr R to get the fish plates.  Anna said, “nothing says dessert like a fish plate!” which made me laugh.  I am very pleased that Vic has found himself such a funny, feisty, fabulous girlfriend.  We all live in the same building like a bunch of folks in an Armistead Maupin novel, so it’s lovely to find that we really like each other.

We all piped some fancy whipped cream on the top to make it a little closer to a mile high. If you are ever in a situation where you want to make friends with an ex-boyfriend’s new girlfriend, I suggest that you put the Vincent Price Co-Star album on the decks.  You can then act out a scene together where you play two saloon girls opposite Vincent’s card sharp in a scene from The Gambler.  We were laughing like drains. Anyhow, what makes a lemon pie a lemon chiffon pie?  It’s not a “thing” here in the UK so I do not know.   Is it the fluffy egg whites?  Does it usually have a tonne of meringue on top?  Mrs Albert W. Newhall didn’t say anything about meringue.  Her recipe was from the “Favorite Recipes of America – Desserts” book.  What a great cover.  I might have to get a copy of this, if only for the PARTY BEVERAGES! Get yourself a piece of pie of some sort, and embark on a fun tour of all the other participating blogs by clicking links below.  The first link is to the general website page, but when I have exact links to the Pieathalon posts I’ll post these as a second link.  Enjoy!

Brian of Caker Cooking – Chess Pie
Ruth of Mid Century Menu – Avocado Lime Pie
Mimi of The Retro WW Experiment – Nesselrode Pie
Erica of Retro Recipe Attempts – Curried Egg Pie
S.S. of A Book of Cookrye — Upside Down Chicken Pie
Sarah of Directionally Challenged Cooking —Simone’s Pet Strawberry Pie
Kelli of Kelli’s Kitchen —Butterscotch Pie
Ashley of A Pinch of Vintage —Schoolteacher Pie
Poppy of Granny Pantries —Black Bottom Pie
Carrie of Ginger Lemon Girl —Chocolate “Pie”
Emily of Dinner is Served 1972 —Seafoam Cantaloupe Pie
Thank you so much Emily for organising such a fun cookalong.  And thank you Ashley from A Pinch of Vintage for sending in this lovely recipe, even if it was 63359 inches too short to be a Mile High Lemon Chiffon Pie.
I can’t wait to see what Sarah of Directionally Challenged Cooking makes of Simone Signoret’s Pet Strawberry Pie…  If it is good, I’m going to make one too, and sit and eat it with a cardigan over my shoulders and sunglasses on to see if I can look as cool as Simone…