My lovely friend and colleague Julie celebrated 10 years with the AP last week so I thought it was high time I made her a cake.  For various reasons I had to make it a few days in advance so decided to make an Ottolenghi cake that I know would keep.  So from “Jerusalem” I made Marmalade, Semolina and Coconut cake which was GORGEOUS. 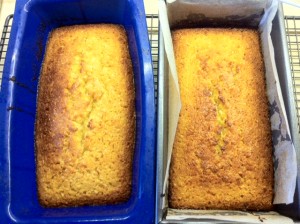 The great thing about this recipe is that it makes 2 cakes and they really do improve with keeping a few days – result x 2.  It is also a result in that I have been seeking a cake that includes marmalade in order to use up some of the RUNNY Bette Davis Marmalade that is hanging around on top of my kitchen cupboards.  I have attempted this recipe 3 times and am still not happy with the results.  Last time I did it I vowed to write a proper letter to PAM THE JAM CORBIN asking her if the proportions are screwy, and now I have a new (to me) typewriter I shall.

Jules liked her cake.  As did everyone else who had a piece – a big hit. 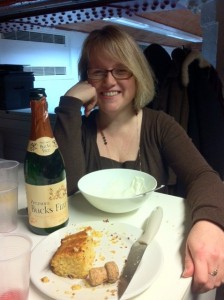 And talking of marmalade…  For the first time ever I have been sent something to review on the blog.  I’ve always wondered what that would be like…  Lucky me, I got a CHRISTMAS HAMPER from the lovely folks at Viking.  I was contacted out of the blue by Jonathan who had found my blog and asked if I would be interested – why not?  So here I am thrilled to receive my hamper. 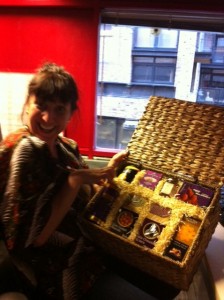 and here is a photo of what I was excited about: 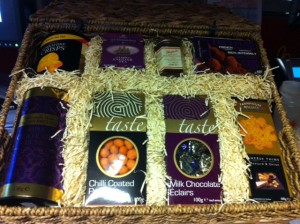 I was even happier when Lucy suggested that there might be a second layer underneath – and there WAS!  Wine and more choccies and all sorts.  Here’s the picture on the Viking website of the entire contents:

I have resisted being a greedy fat pig and have been sharing like a good girl.  The guys on reception and security tried out the chocolate eclairs and the Cranberry & White Chocolate Chunk Cookies and said:

“The biscuits were the most popular.  Everyone thought they had a lovely taste, were not too crumbly and dry.  Not too sweet either.  Some described them as buttery.

Some found the sweets too sweet.  But they still went!!!” 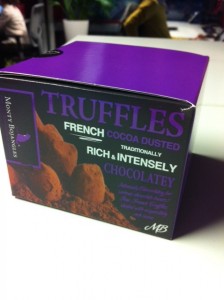 The Monty BoJangles Truffles caused a feeding frenzy in the Archive department.  Excuse my swearing but they were bloody delicious.  Don’t let them melt though and then try and make Katharine Hepburn Brownies out of them…

I LOVED the Yorkshire Crisps.  Oh nom nom as the French folk in the Archive would say.  And there is still tonnes to go.

I think I have to include a disclaimer in my review – I am under no obligation to review or praise but I am hereby stating that I LOVED getting my hamper, everything in it was fab and I think the price is really good.  So if you are thinking of getting a hamper, hop over to Viking and nab one! I think one of the German team here was so impressed with it that they are going to buy one for a client and send it over.

Oh, and although I am tempted to use the marmalade that was in the hamper 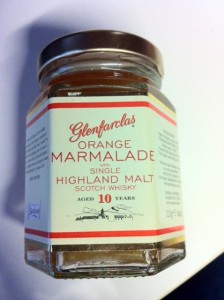 for another Ottolenghi cake, as it has Highland Malt Scotch Whisky in it I might give it to my dad for Christmas.  It’s about the time when I start thinking about prezzies… 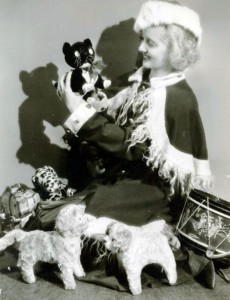