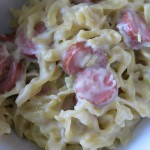 THRILLED to be mentioned on my favourite blog of all time Caker Cooking this week.  Such an honour that Brian chose to throw caution to the wind and have a go one of the Richard O’Sullivan recipes I left out when I attempted his 7 Day Survival Course.  I sent Brian this recipe before most of us here in the UK even suspected there were gee gees in lasagne so it’s kind of perfect timing.  Don’t fret my fellow equifiles, there is no horse in it,  just horseradish.

There has been much going on in the  Silver Screen Suppers world lately, mostly involving good old fashioned courtship.  Spring has sprung and everyone is getting very frisky.  I’m happy to report that I have managed to break my habit of half a lifetime and go out on a few dates with a man who is neither a DJ nor works in a record shop.  I was mulling it all over at a Valentine’s Day singles night as I was chatted up by one bloke who makes his living selling records on ebay, and another who runs a record shop in Camden.  And that is all, not a single man with a non music related pastime spoke to me, apart from the gay guy who was there to sing us some songs.  I realised that the only men I’ve been even slightly romantically entangled with over the last four years go like this – DJ, record shop guy, DJ.

Thanks Brian for making me laugh every single time I look at Caker Cooking – and dear reader, if you’ve never popped over to visit, do so soon, if only to appreciate the fact that not everyone has the opportunity to buy prawn cocktail crisps whenever they fancy some.  Or indeed to marvel at the beautiful simplicity of recipes that contain just three ingredients, one of which is a can of 7-Up. 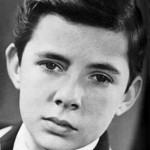 Leave a Reply to Coffee and Crumpets Cancel reply