I am a sucker for a Caesar and have tried a few movie star versions.  Grace Kelly’s was so good it was Recipe of the Month way back in April 2019, Ruth Roman’s method calls for coddled eggs and Jessica Walter’s garlic oil required a bit of forward planning.  And so it was with Shelley’s. 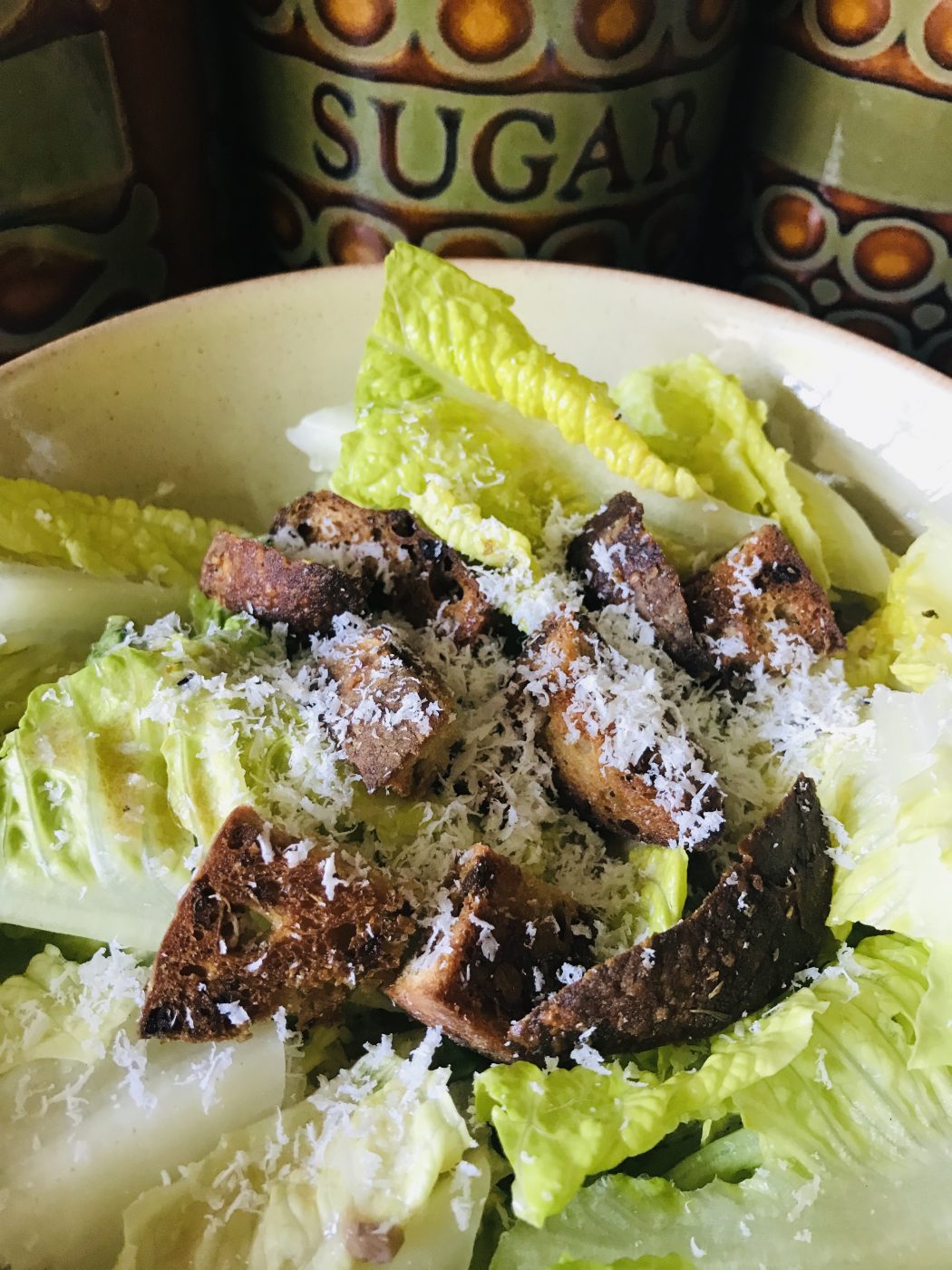 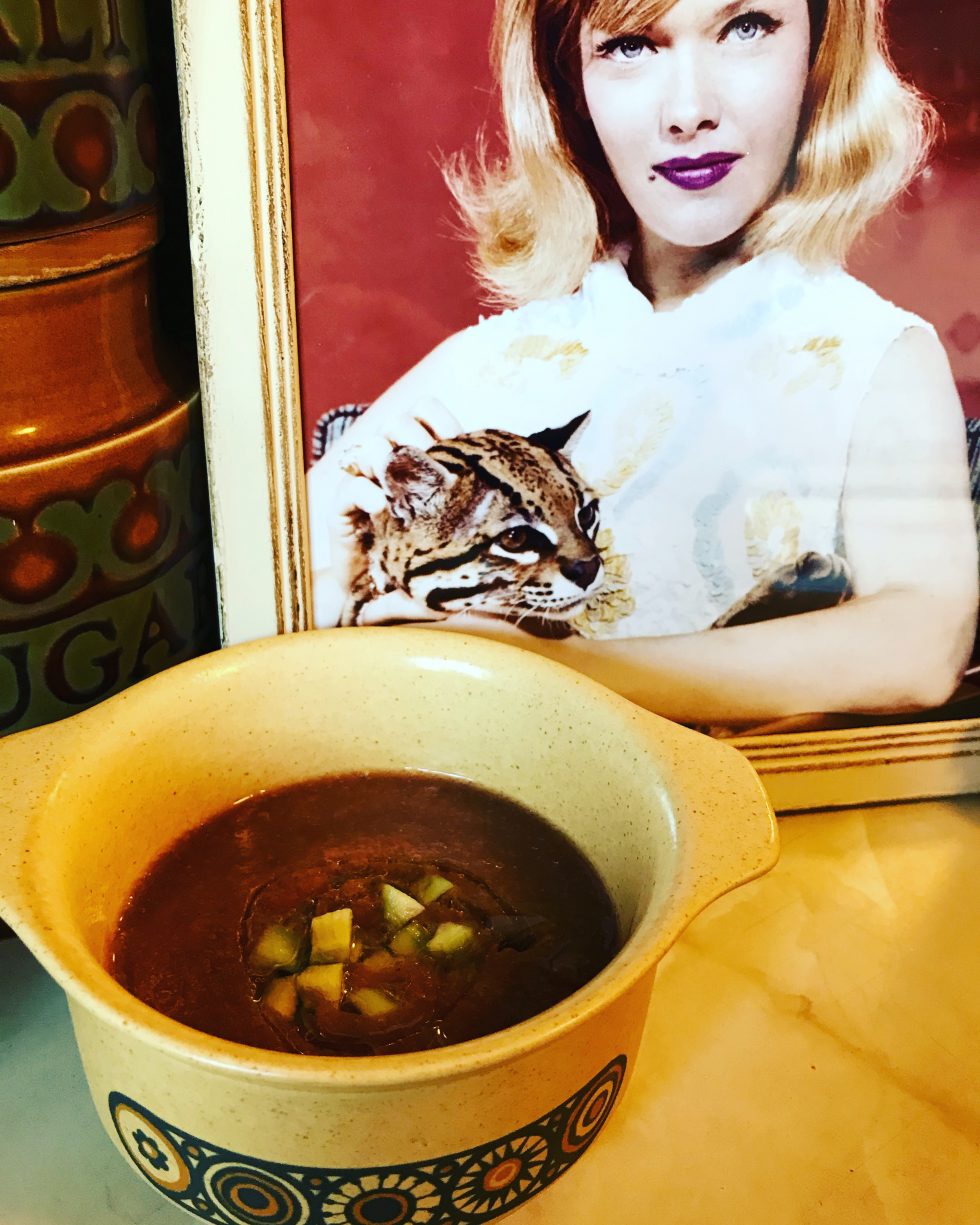 so slicing it and submerging it in some olive oil was an excellent alternative to chucking it in the bin.  Jessica Walter recommended a couple of hours to infuse the oil, but Shelley directed twenty-four, so I really was planning ahead for this one. 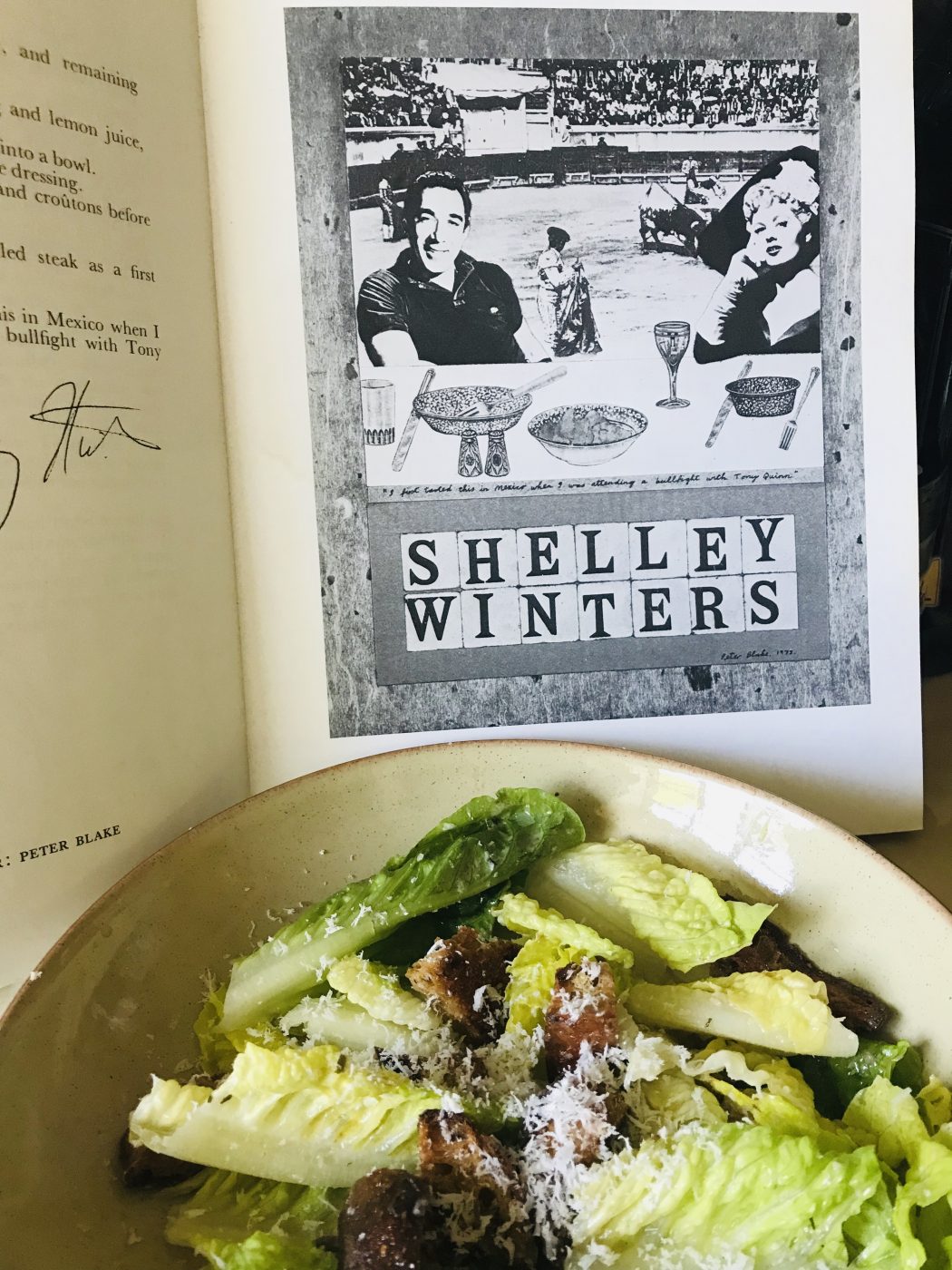 I love the illustrations in The White Elephant Cookbook – this one is by Peter Blake and is a visualisation of Shelley’s comment “I first tasted this is Mexico where I was attending a bullfight with Tony Quinn.” 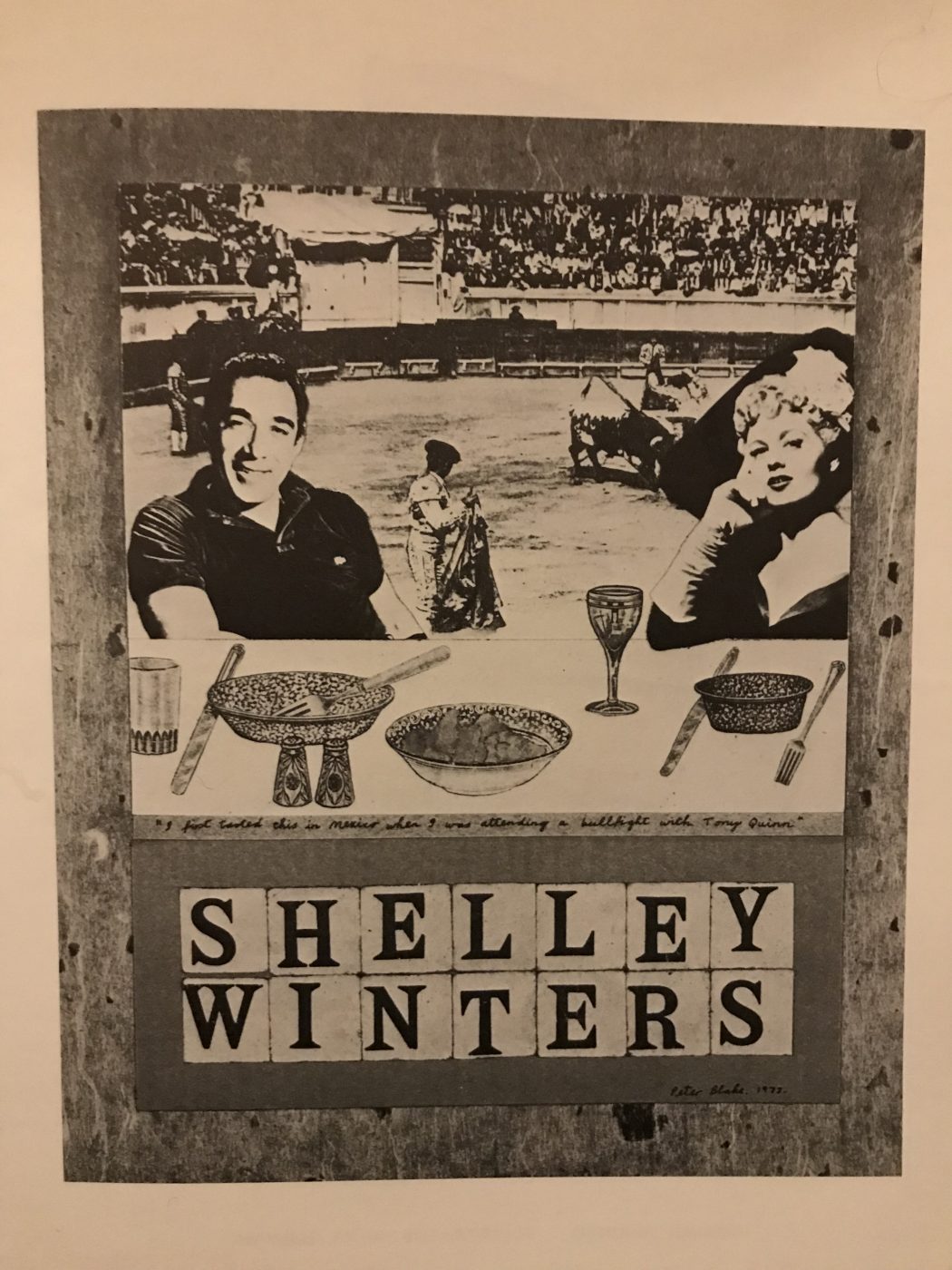 I found it odd that Shelley used a whole raw egg rather than just the yolk but a little tour around the Googleverse showed me that this indeed was a “thing” so I went for it. 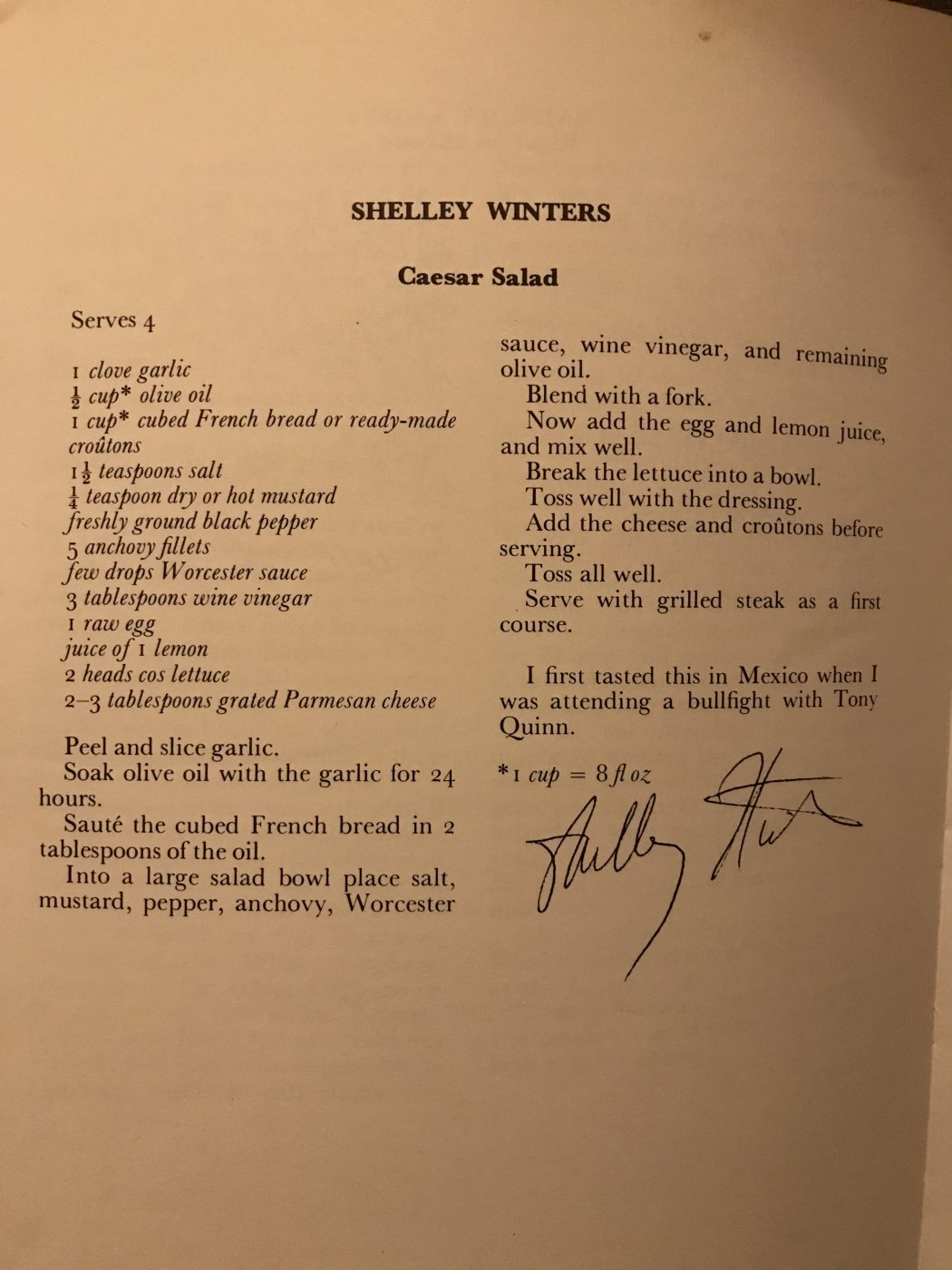 However, in another version of Shelley’s salad, she called for a “minute boiled egg” so take your pick. 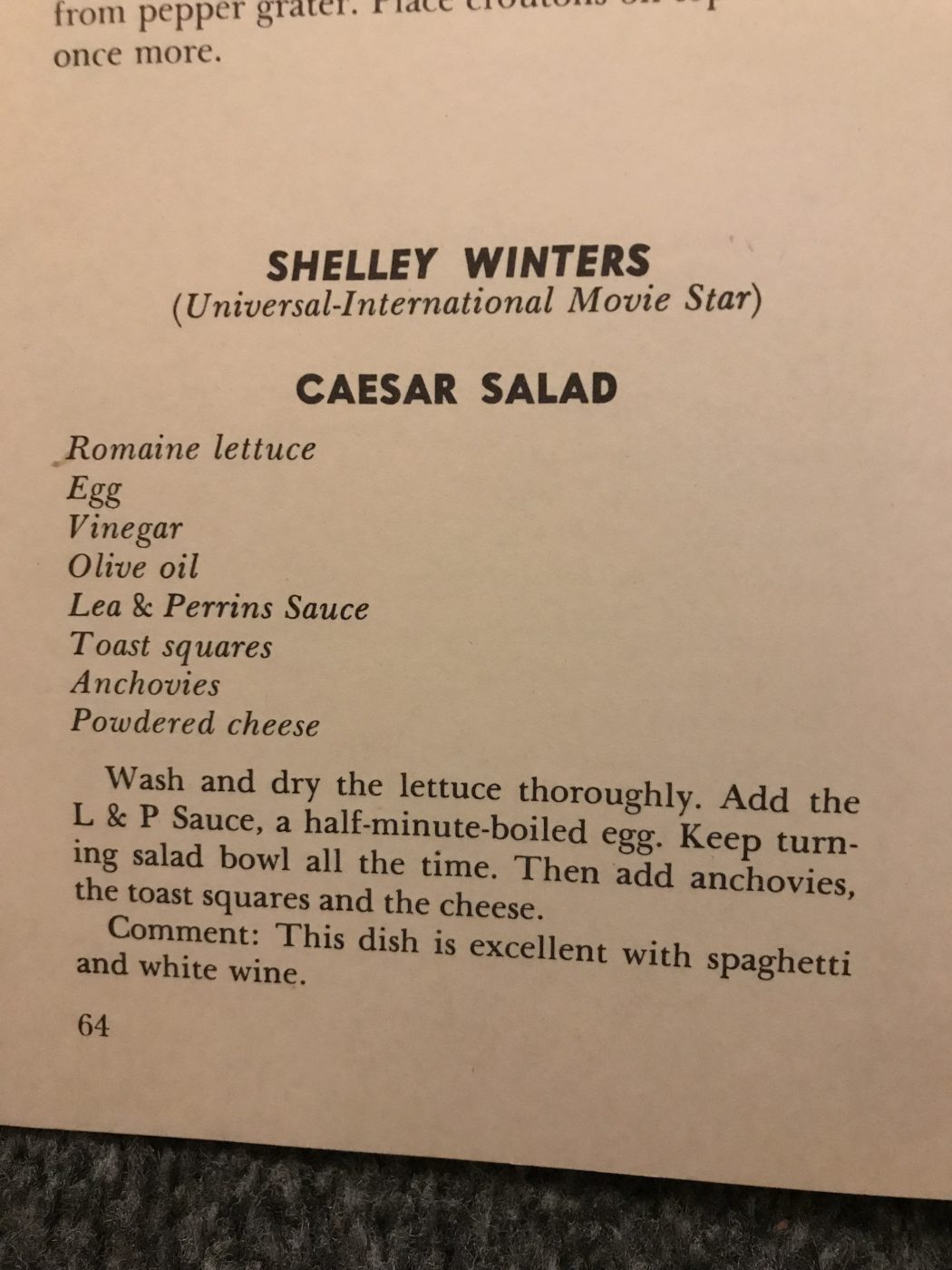 The version with the raw egg is a Caesar for those amongst you who favour a lemony dressing rather than a creamy or vinegary one.  Peter, my co-writer on the Supper with the Stars found the dressing too salty so you might want to reduce the salt in the dressing a bit if you are cutting down.  I liked Shelley’s dressing but Jessica Walters’ Caesar is still top of the leader board for me. 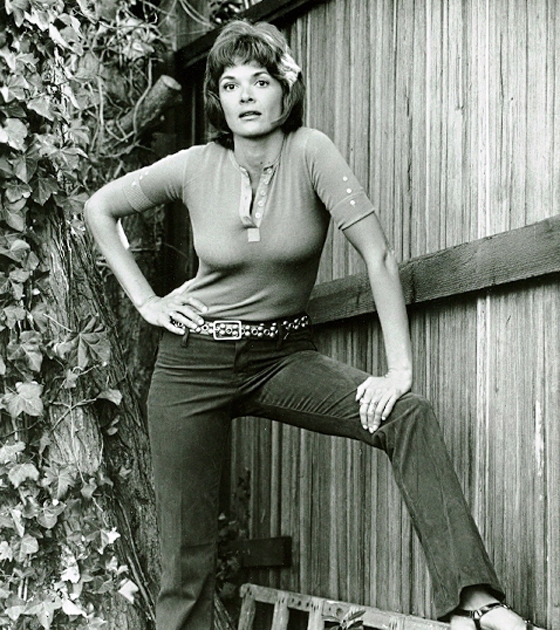 Here for the amusement of my chum Julie is a pic of Shelley Winters wearing a preposterous hat in a preposterous film – Tentacoli.  Highly recommended for a watch party because it is so bad, it’s good! 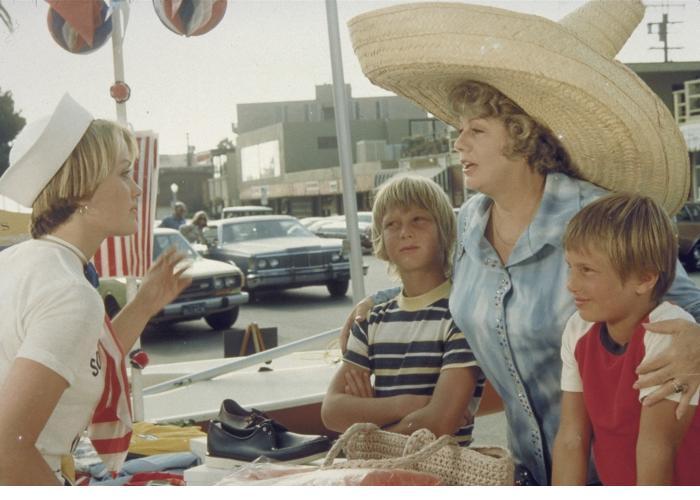 Julie and I began fortnightly watch parties this time last year to cheer ourselves up during the pandemic.  Julie lives a 14-hour walk away from my place and during the craziness of lockdowns when we were both on our lonesome A LOT, our watch parties were a glorious lifeline. We always end up crying with laughter about something going on in the chatbox, (for Tentacoli it was each of us typing FLEE FLEE FLEE every time someone was in giant squid danger) 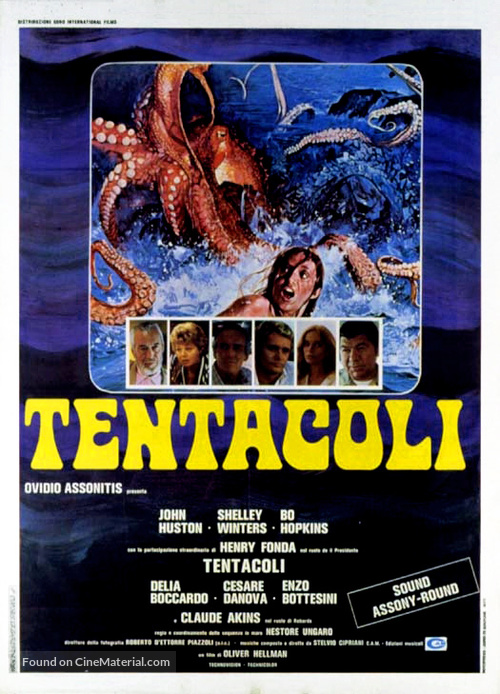 but Tentacoli remains our favourite of all the films we have seen so far.  We love it much so that we are making a Tentacoli watch party an annual event and it it happened this Thursday. Here’s a glimpse into the kind of stuff that has us crying with laughter in our respective beds in our pyjamas.

I have to thank one of my test cooks for suggesting this spectacularly bad film for our very first watch party.  Thank you, Katherine Schneller!  Our lives have been enriched by Tentacoli aka Tentacles! 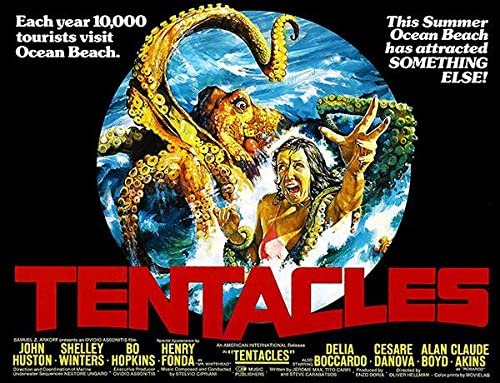 If you have a chum that doesn’t live near you, I can heartily recommend watching a less than perfect film and amusing each other with silly comments.  As far as I know, it’s only Amazon Prime that offers the chat box option alongside the film. You don’t have to have a membership, you can just rent a film and party!  Here’s our exchange about the John Huston character who we first see wearing a very long Rip Van Winkle style nightshirt which we christened a “nightie”. 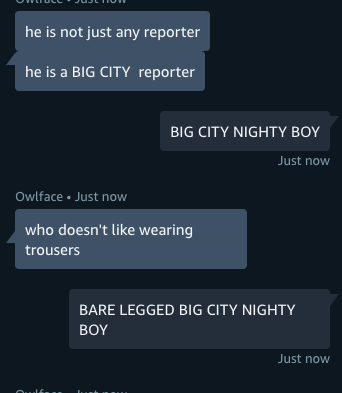 We mark all the films out of 5 and here’s where we are to date.  The symbol that looks like a lasso is actually a necklace.  We had to introduce this one after spending half of Raffles laughing at how all the aristocracy pronounced neck-lace.

Here’s to another year of watch parties!