I just LOVED receiving photographs of the cucumber crocodiles made for the Supper with the Stars book launch competition. 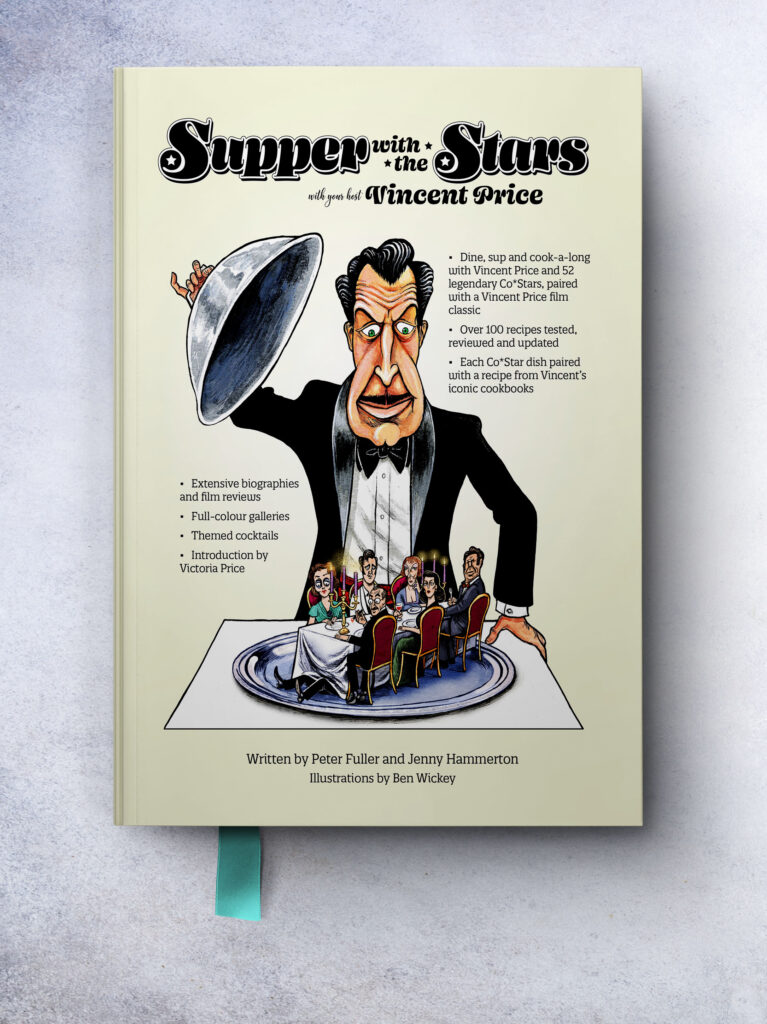 It really brought me great, great joy! Here are a couple of photos by Sue Foll of my cucumber croc demo at the book launch (yes, I dyed mini pickled onions red and green) and there follows a veritable PARADE of FANGTASTIC crocs. 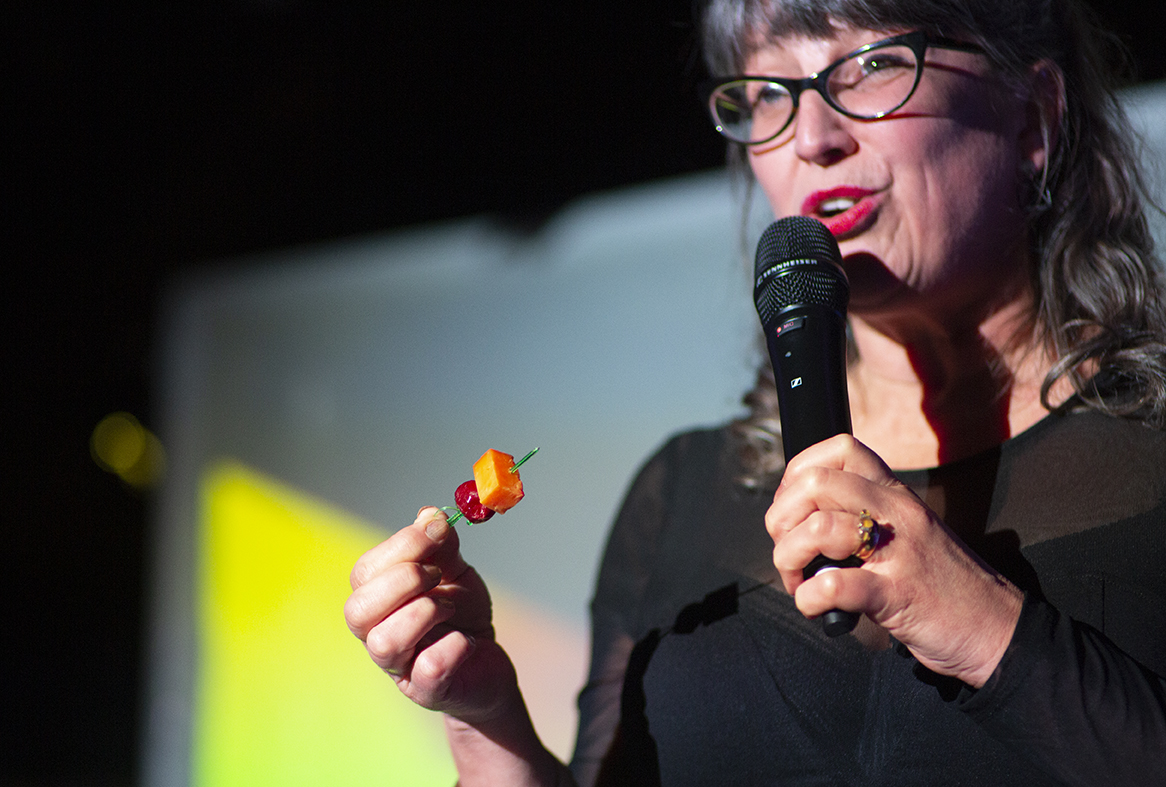 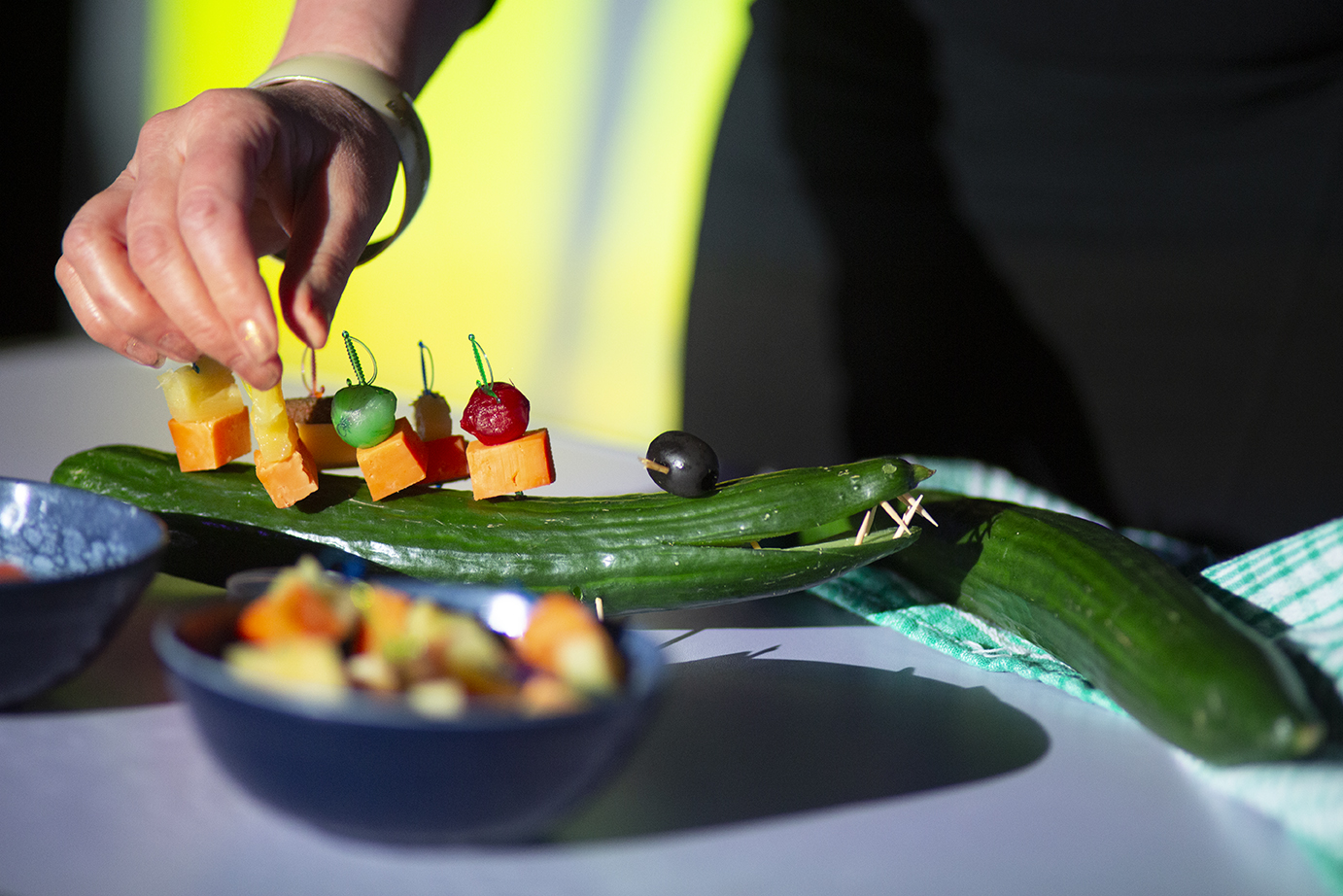 I have sent the following pix to Victoria Price for judging, and will announce the three winners very soon.

First into the inbox was this swamp dwelling creature made by my writer chum and Alan Ladd fan, VT Dorchester 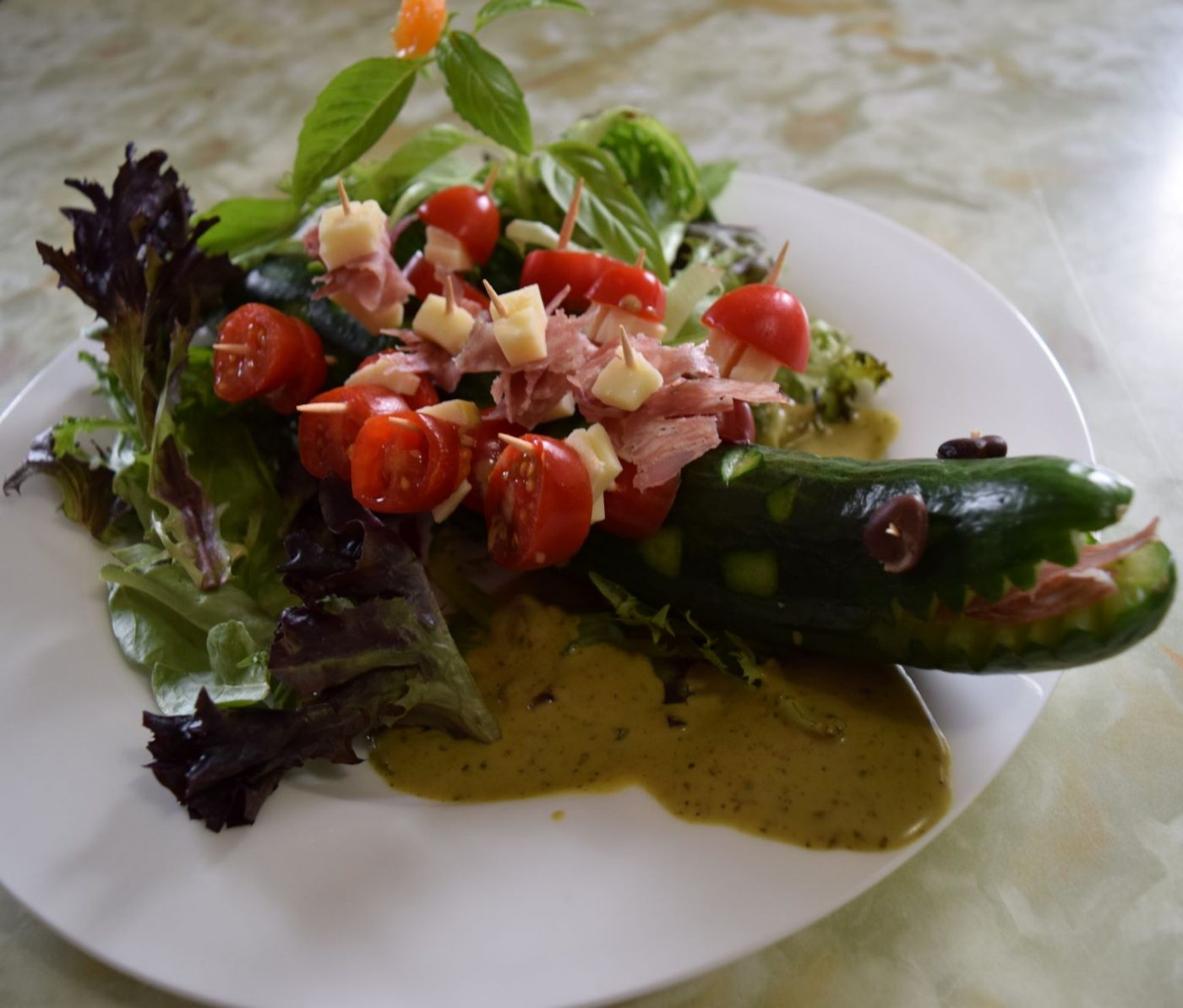 The caption read, “Emerging from deep in the infamous south Okanagan swamps, comes an unusual hybrid alligator/crocodile cucumber, noted for it’s unusually tasty scale formation and it’s ability to grow so big it can reach the top of orange trees… even though oranges don’t grow here.  What a fun way to spend some time on a windy, rainy afternoon.”

Second up, a super colourful entry from food writer Brian Theis of The Infinite Feast 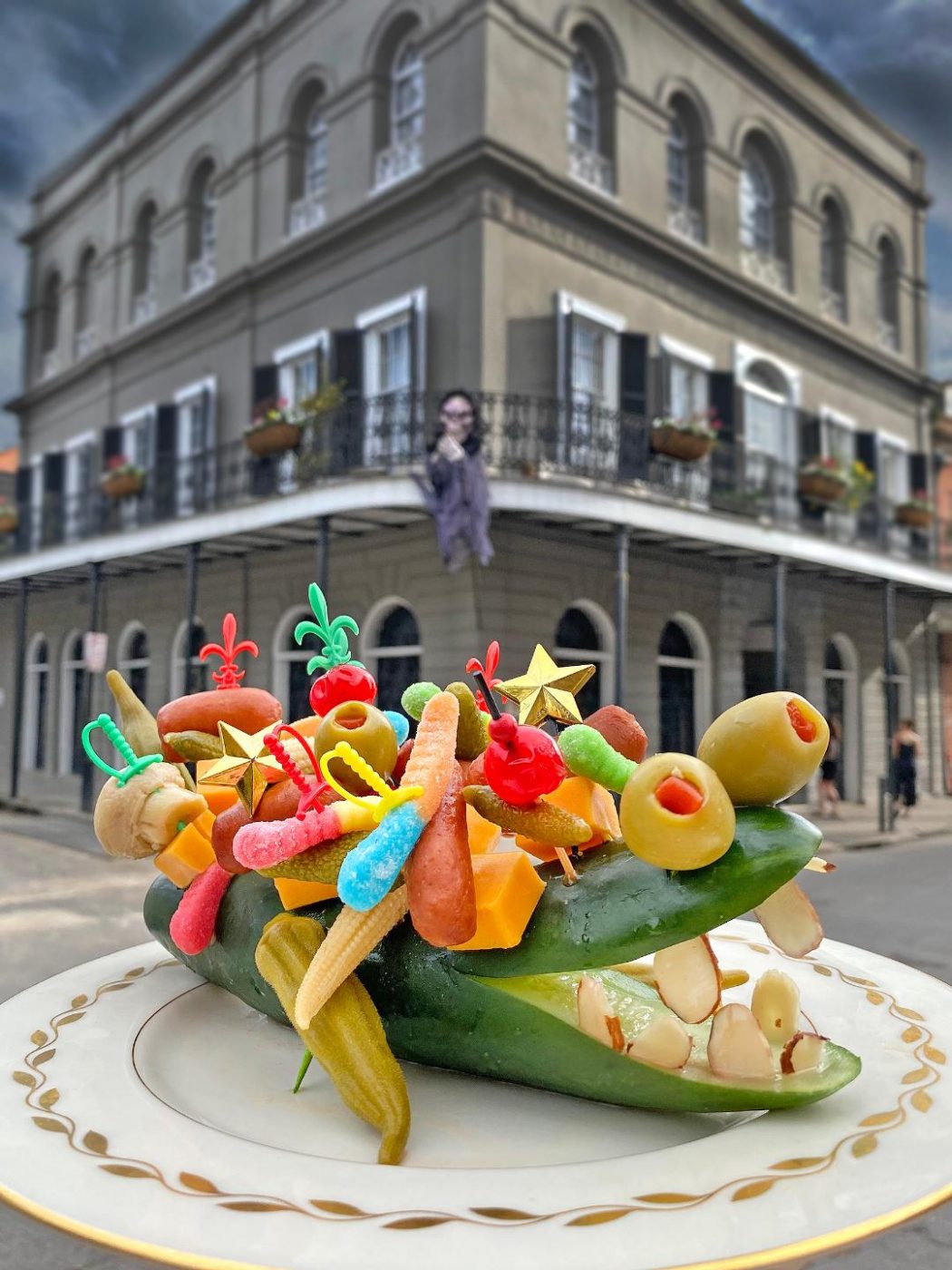 “Meet Alvin the Alligator, aka The Crescent City Crocodile Cucumber. He just crawled out of the New Orleans bayou and is clearly ready to party! For extra “Vincent Price”, Alvin is pictured here ready to attack the prior home of the infamous Madame Marie Lalaurie, also known as the most haunted mansion in all of New Orleans.  Alvin features pickled okra feet and tail, naturally, he’s from the Louisiana bayou!”
My blogging penpal Annette of I’m Annette made a super-minimalist croc, I love his TEEF! 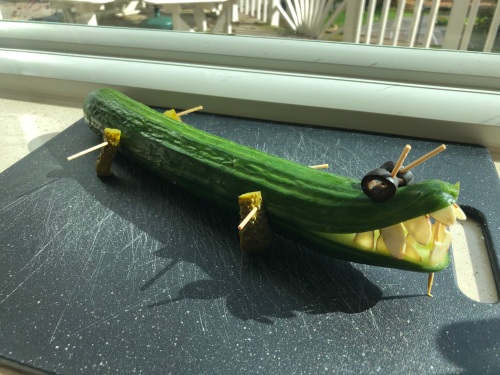 Matthew Lenton, a fellow Film Studies graduate from the University of Kent made this beauty for his niece’s birthday party in Sri Lanka. 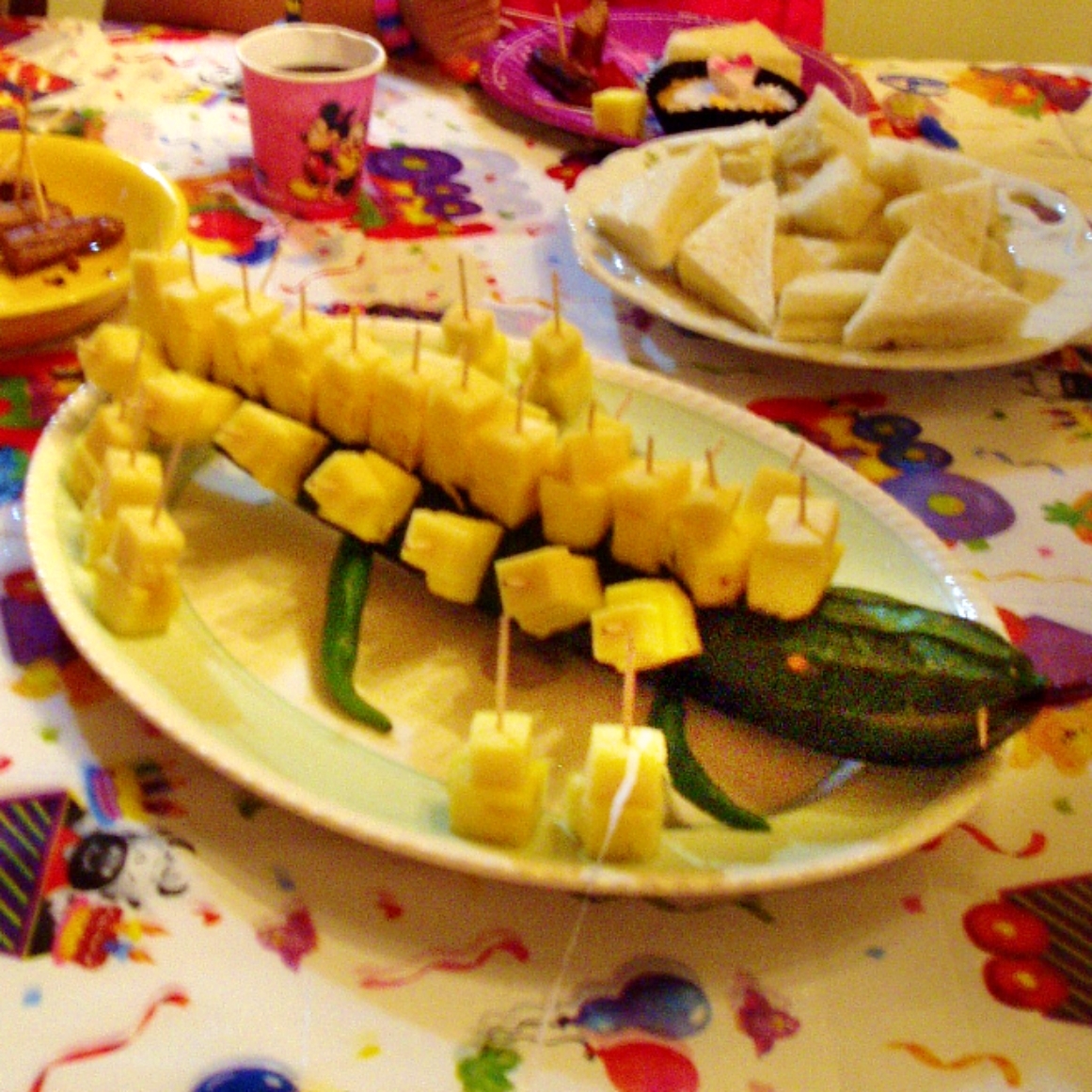 Gaz (without whom I never would have met my co-writer Peter and Supper with the Stars would not exist) of the much loved Abertoir International Horror Festival of Wales made this cutie.  Double olive feet and about to munch the Vincent Price Cooking Price-Wise book!  Nice! 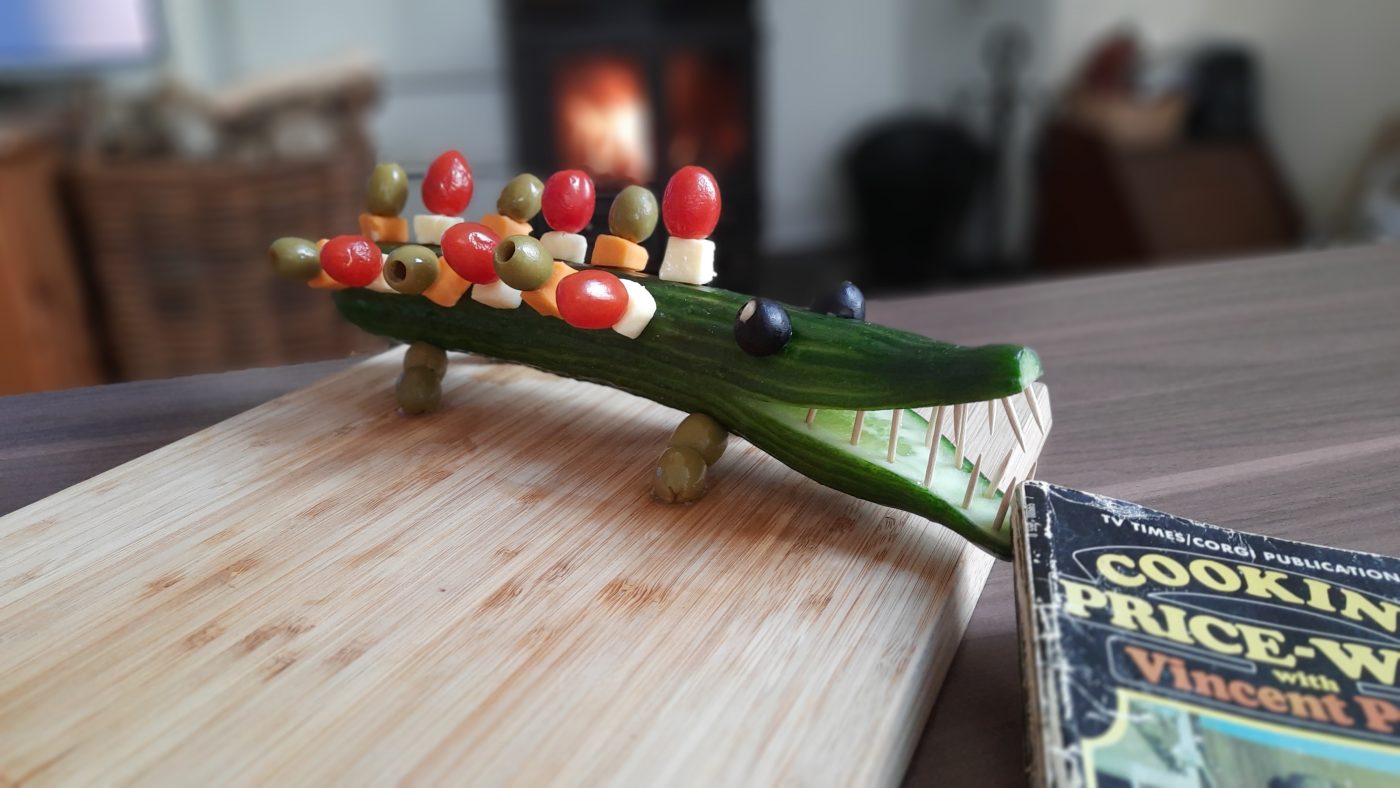 My London Writers’ Salon bosom buddy Rachel Blackmore had fun making this with her friend Emma, “we made him in amongst catering for nine people on Halloween. We wanted spiky chunks of cheese for his spine – but they kept splitting so we were FORCED to eat them – but we had lots of fun and are now planning a Christmas Croc!”  Do send me a photo of that, Rachel!  I’m hoping tinsel will be involved somehow…  Love his crinkle cut carrot teeth! 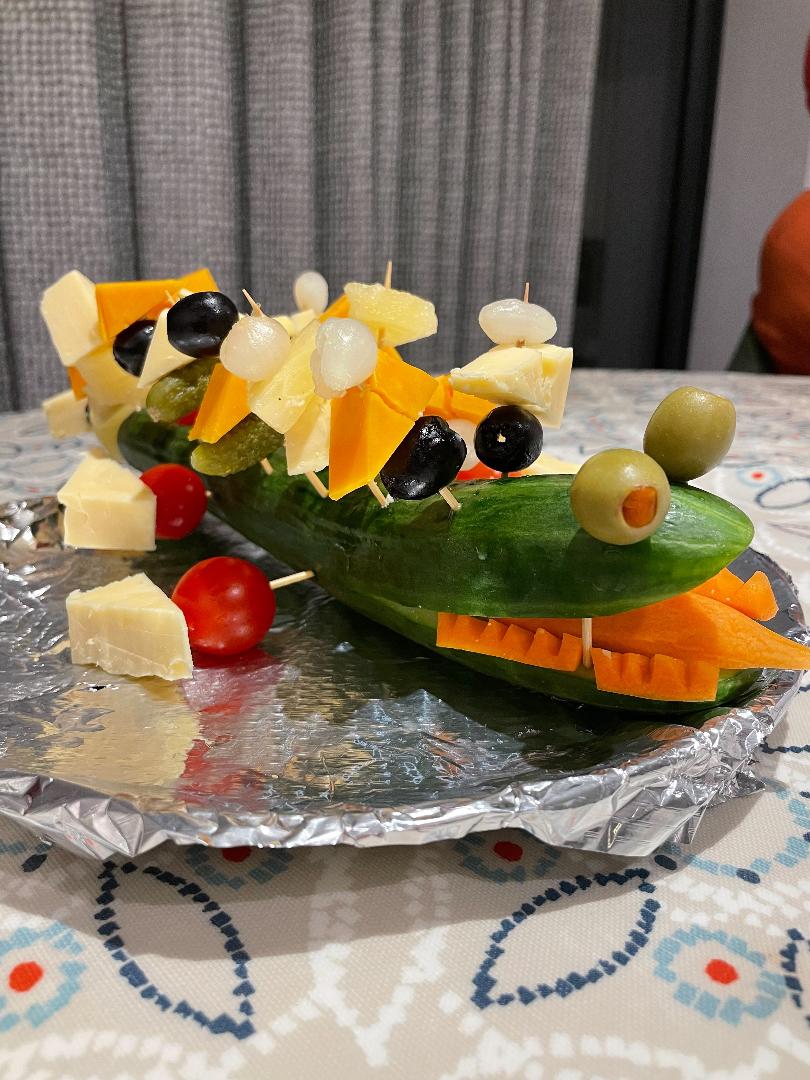 I have to include Lyndsay Phillips’ cucumber crocodile which she made just for herself one day in quarantine early in the pandemic.  It was Lyndsay’s creativity, using blueberries, radishes and mozzarella balls that prompted me to run a cucumber crocodile competition. 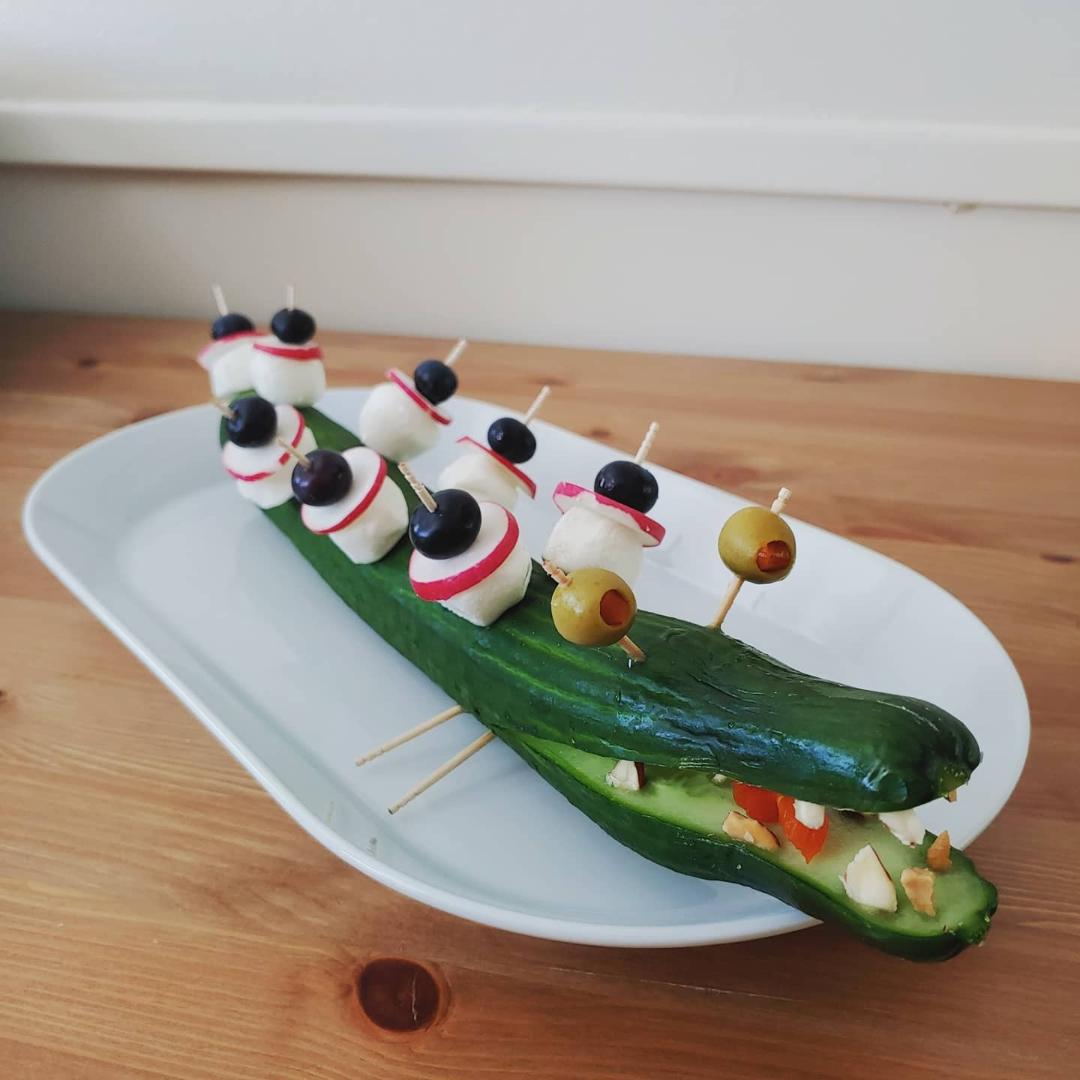 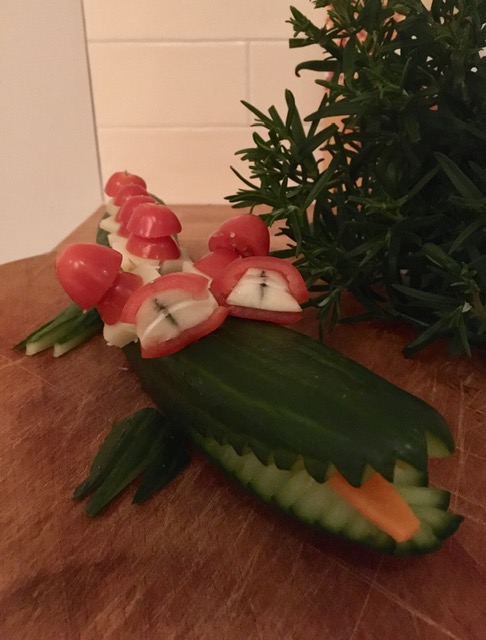 Last but not least, cult film director Jan Manthy (aka Fred Karno) and his family made a display entitled “Karno Krazy Kocktail Kumcumbers in The Oceans Of Fantasy. Guest appearance from Boney M!” 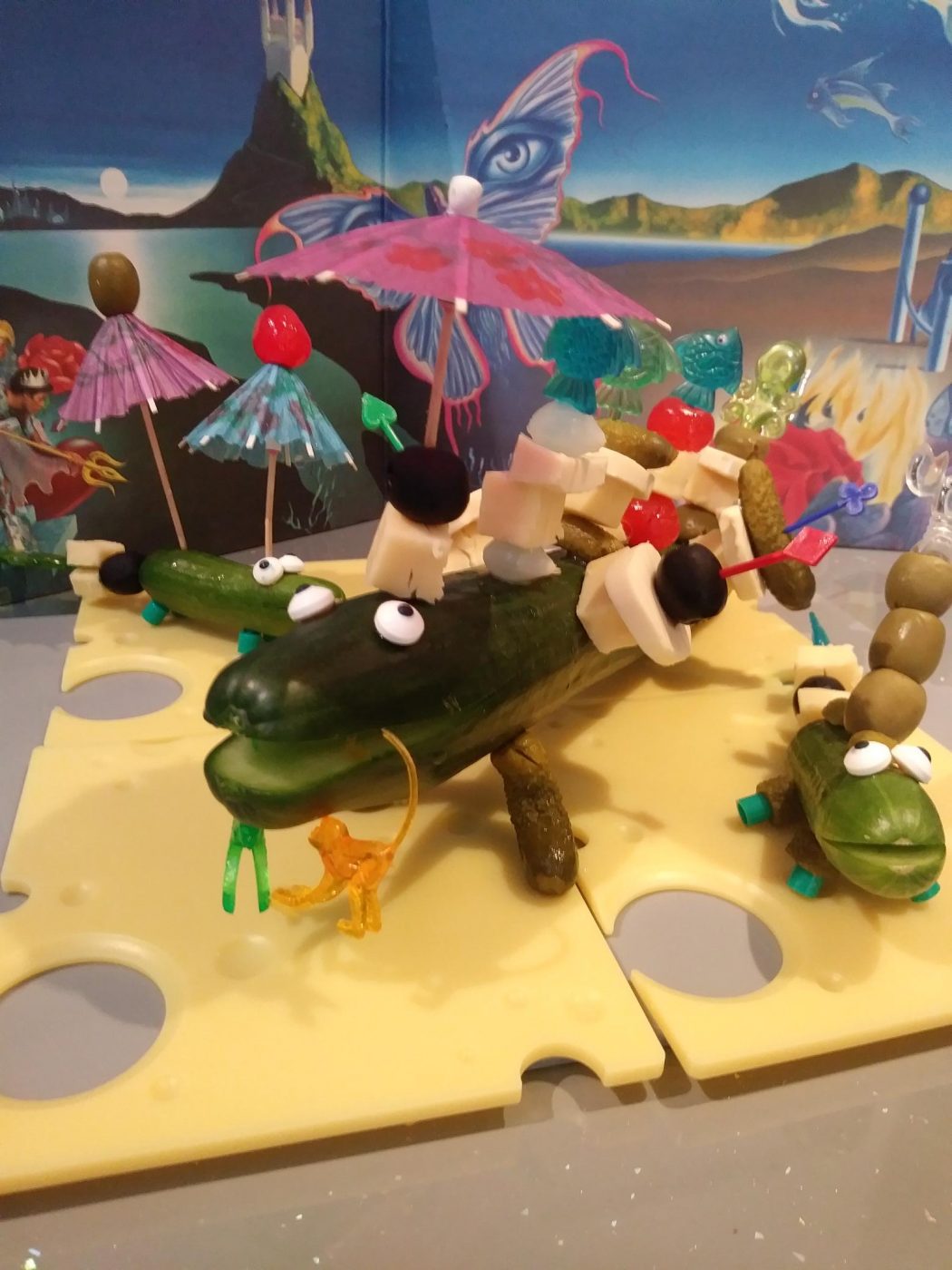 I didn’t skew the vote by sending Victoria TWO photos of Jan’s crocodiles but I just had to share this close-up with you! 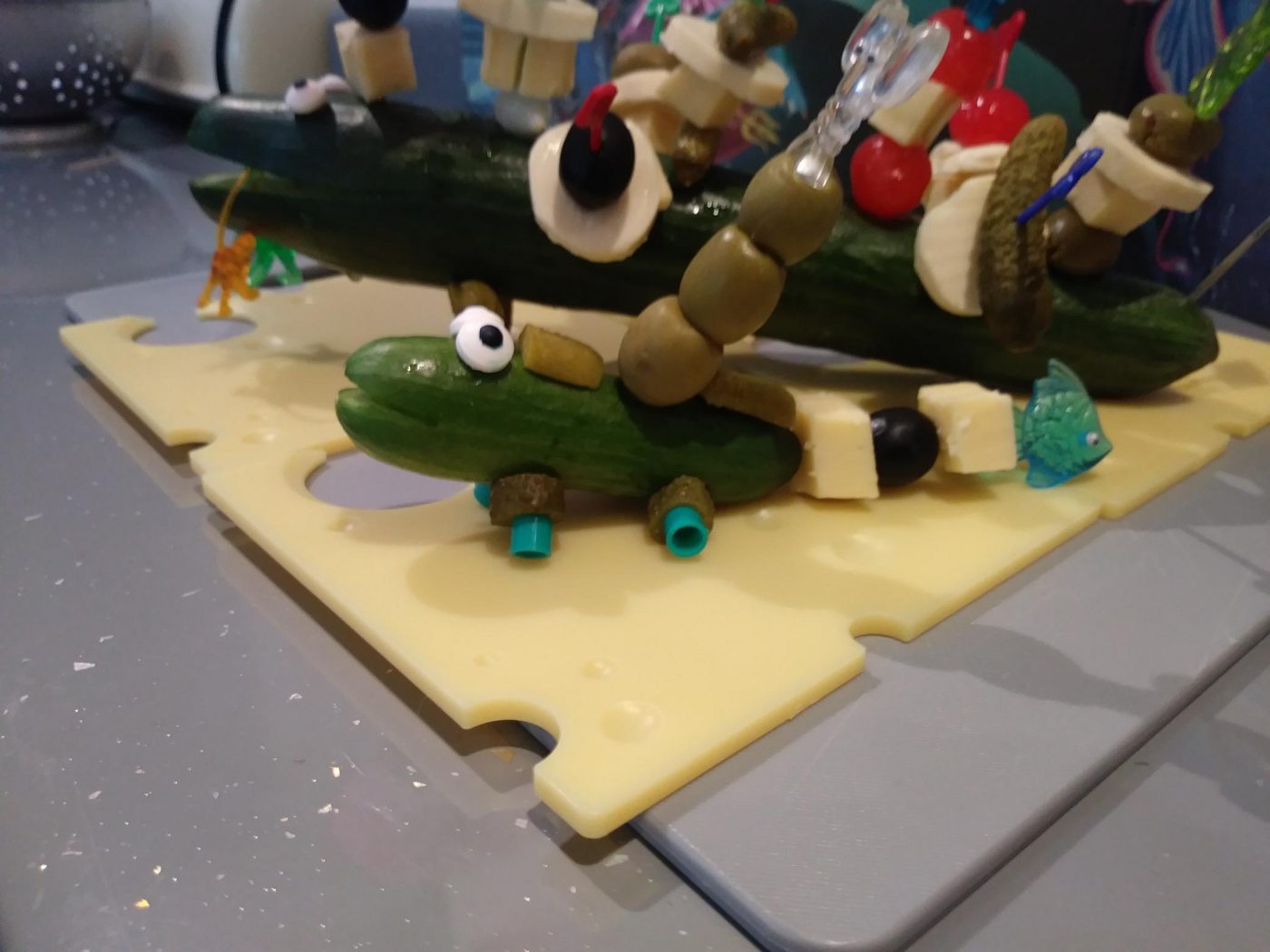 All of these photos of boundless creativity in the kitchen make me insanely happy.  Thanks for entering everyone, I’ll be back to announce the three winners soon.
Just a reminder that there were only 250 copies of the Vincent Price book printed so don’t delay if you want to grab one. 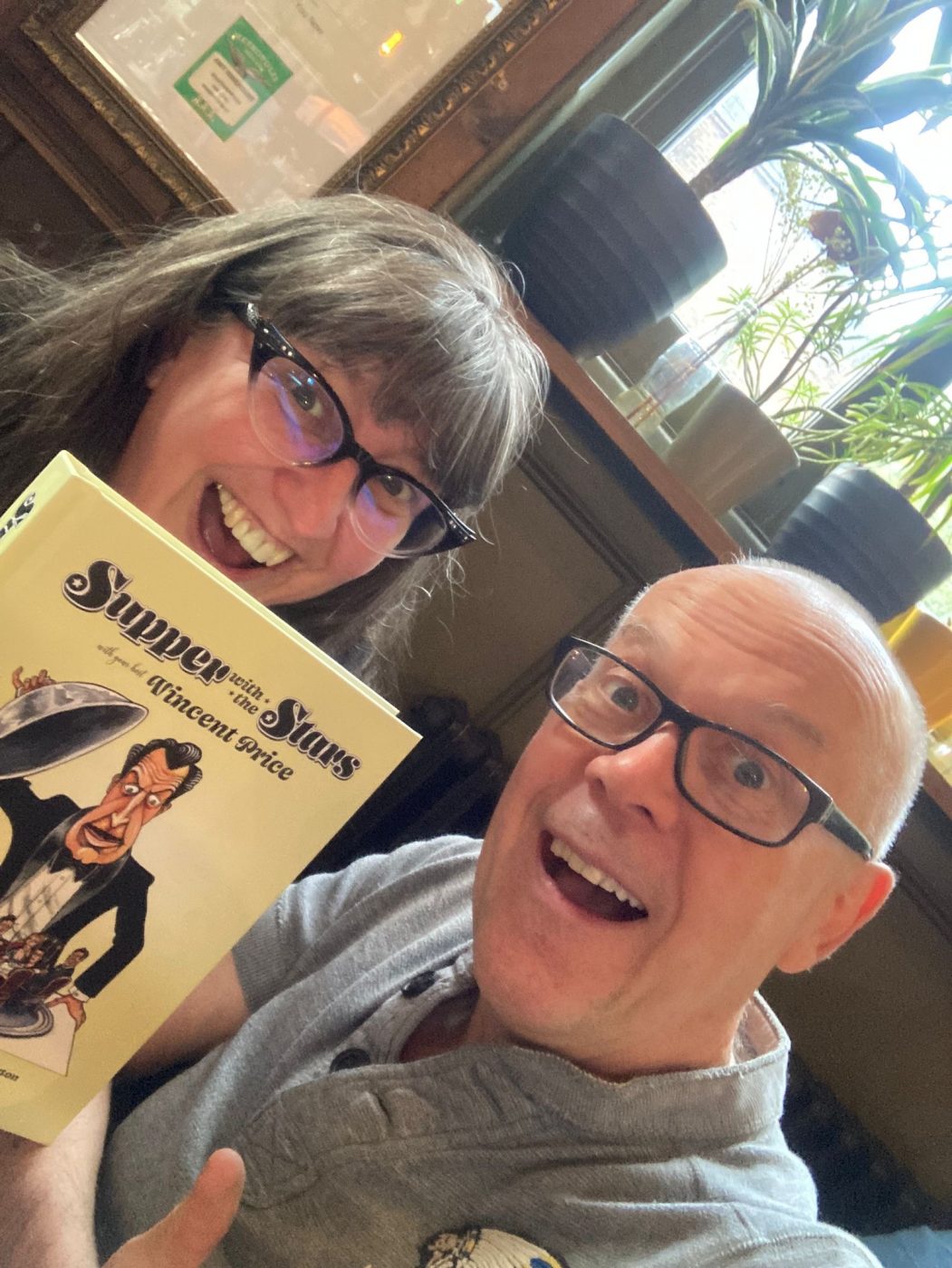 They really are things of great beauty, I think every home should have one!  If you’d like a copy for yourself or for a loved one (Christmas is looming!) check out Peter’s website to see how to order. 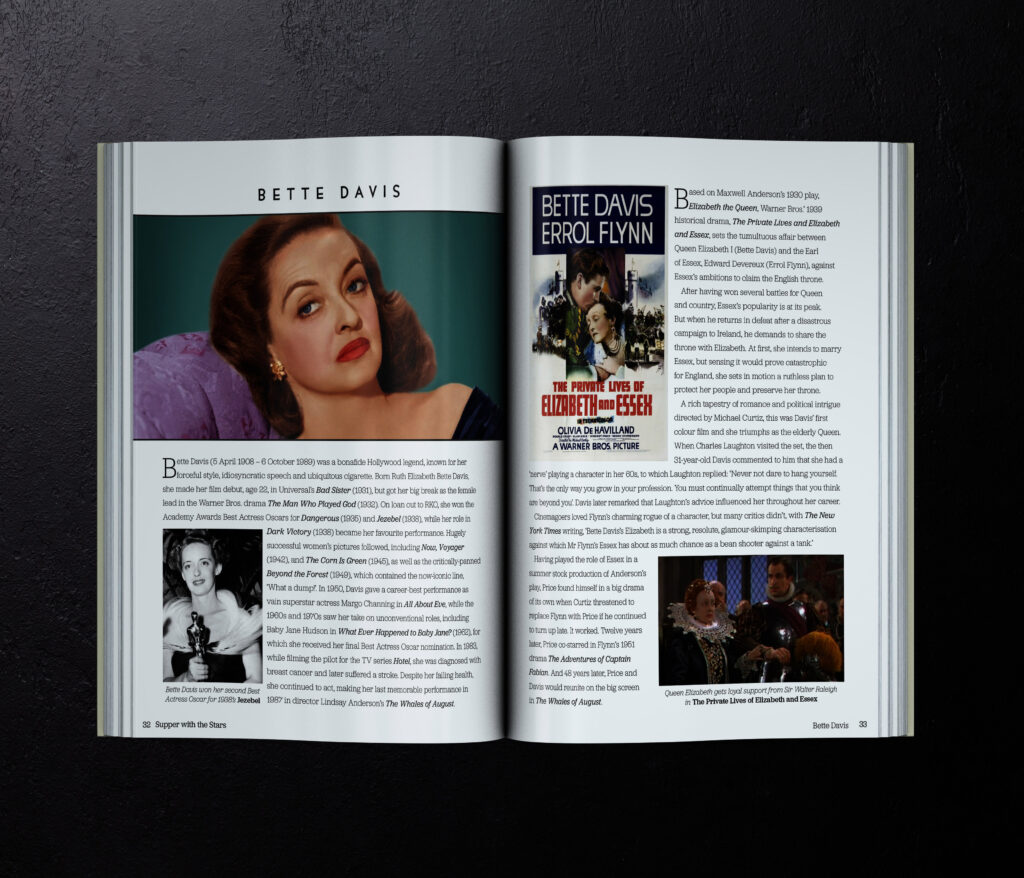